Scott Dixon was back atop the speed charts during the third practice for Sunday’s Toyota Grand Prix of Long Beach. Dixon’s quick time of 1:07.1348 came in the final minutes of the session, making it the second time he’s led practice this weekend (he topped opening practice on Friday).

Of note, Dale Coyne Racing’s Sebastien Bourdais had an awkward start to the day, making light contact with the barriers in turn three. However, only the front wing suffered damage, and it was light damage at that, allowing Bourdais to quickly rejoin the session after brief repairs. He ended the session in ninth.

Two other drivers experienced hardships during third practice. Tony Kanaan suffered mechanical gremlins, which actually kept him from running for most of the session. The Chip Ganassi Racing driver suffered a sensor issue that the team had trouble diagnosing. However, they did manage to make repairs and Kanaan ran five laps in the final minutes to record the 15th best time. “We had a sensor issue that I wasn’t aware of. It took a long time but the guys did a great job to get me out for five laps,” he told IndyCar radio afterward. “It’s not good when you’re struggling. But great job by NTT Data guys. (I) wasn’t expecting to be out this session.”

James Hinchliffe, too, had problems of his own after leading much of the session before finishing up in fourth. He ran wide into the turn one runoff area and rejoined running slowly near the end of practice, though it was unclear if he had a problem or was being cautious. 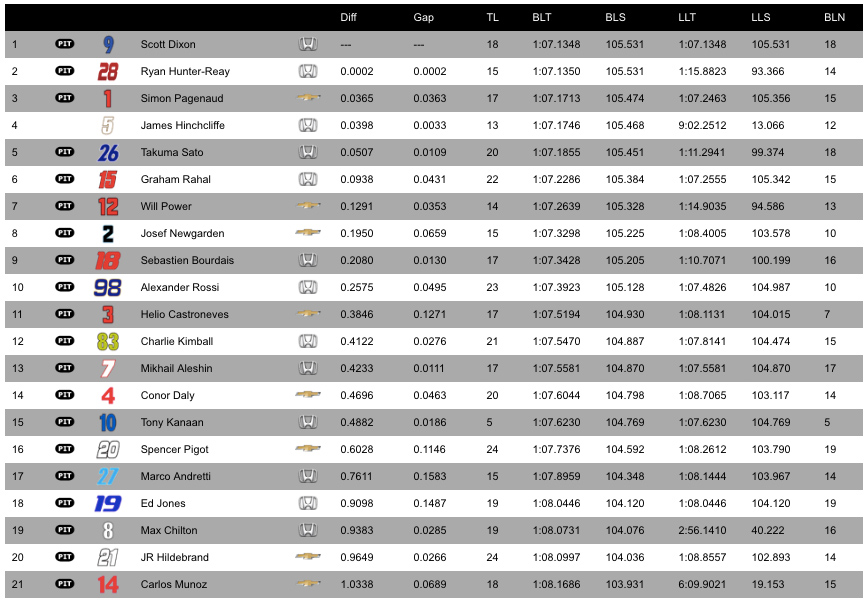