Marco Andretti put Andretti Autosport and Honda back on top in the second 45-minute free practice session for the Verizon IndyCar Series’ Honda Indy Grand Prix of Alabama, Round 3 of the 2017 season.

The driver of the No. 27 Honda, running in a plain red-and-white livery this weekend with United Fiber & Data only in an associate sponsor role this weekend, put down a best time of 1:07.7134, after installing a set of Firestone’s red alternate tires.

Team Penske’s pair of Simon Pagenaud and Will Power also got into the 1:07 bracket, as did initial Barber winner Helio Castroneves and six-time Barber podium finisher Scott Dixon.

Six of the top 10 were Hondas in this session after Penske and Chevrolet completed a 1-4 sweep in the morning session.

Two red flags interrupted running, a pair of lazy spins for both Max Chilton at Turn 15 and Ed Jones at Turn 5, with neither Brit (yes, Jones is Dubai-based) incurring any damage to their cars.

Meanwhile Ryan Hunter-Reay had a moment as he ran wide at Turn 2 and made light contact with the outside ARMCO barrier to his left front tire, but again sustained no visible damage. Charlie Kimball had a quick off-and-on at the end of the session but escaped unharmed.

Third practice runs tomorrow morning with qualifying coming Saturday afternoon at 3:15 p.m. CT and local time, then on air on NBCSN and online at 3:30 p.m. CT. 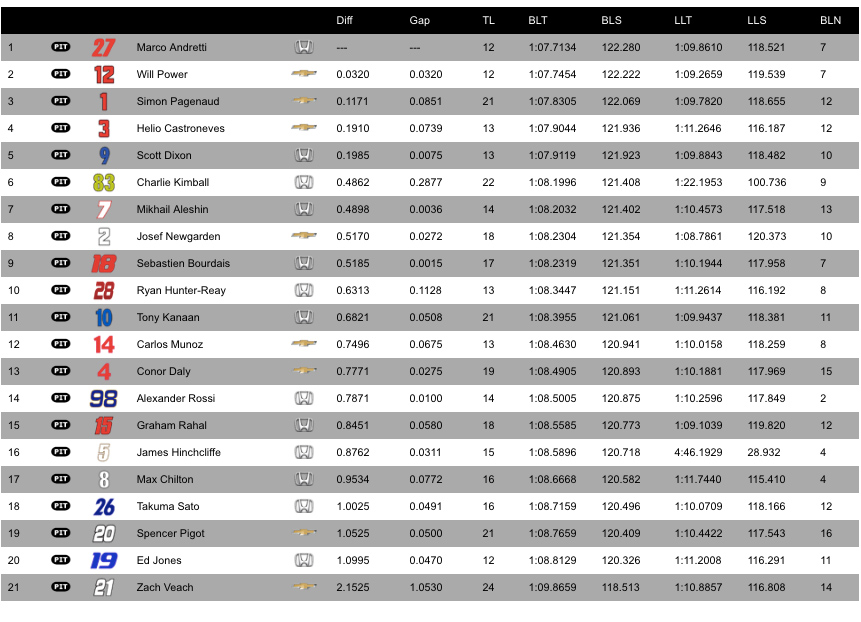