Team Penske and Chevrolet was poised to go 1-2-3, in numerical order, in the opening 45-minute practice session for this weekend’s Honda Indy Grand Prix of Alabama, the third round of the 2017 Verizon IndyCar Series season.

And then they went one better with a 1-4 sweep right at the end of the session.

Defending race and series champion Simon Pagenaud took the No. 1 Menards Team Penske Chevrolet to the top of the timesheets at the 2.3-mile Barber Motorsports Park road course at 1:08.1104.

“It’s obviously a good start with our teammates. I think we were happy at the test; it seems to suit us well. We will try to capitalize on this the rest of this weekend. It’s great having Fitzgerald Glider Kit on board; they’re Tennessee boys, just like me,” Newgarden told IndyCar Radio’s Jake Query after the session.

Eight Hondas were next, led by Alexander Rossi in the No. 98 Andretti-Herta Autosport Honda in fifth at 1:08.4560. Rossi and Marco Andretti are in revised liveries this weekend, red and blue and red and white respectively.

The only red flag came when points leader Sebastien Bourdais ran wide exiting Turn 1 in his No. 18 Dale Coyne Racing Honda and collected a yard sign, which was funny but didn’t cause any damage to his car.

Series debutante Zach Veach clocked in at 1:10.6346 in the No. 21 Fuzzy’s Ultra Premium Vodka Chevrolet, about 1.7 seconds off teammate Spencer Pigot in his first official IndyCar race weekend filling in for the injured JR Hildebrand.

Hildebrand is on site this weekend and provided an update to IndyCar Radio’s Query during the session:

“It was really hard to tell initially,” he said. “The X-rays at Long Beach didn’t look that bad. Different place, set of circumstances. Once they dug into it via a CT scan, it was more blown up than they thought it was. The doctors tried to keep my expectations out of control. There was a high risk of doing further damage if I got in the car this weekend. Phoenix is the goal for next weekend.”

Times are below. Owing to the track delay for barrier repairs from the morning’s Battery Tender Mazda MX-5 Cup presented by BFGoodrich Tires practice session, the Friday schedule is an hour behind. 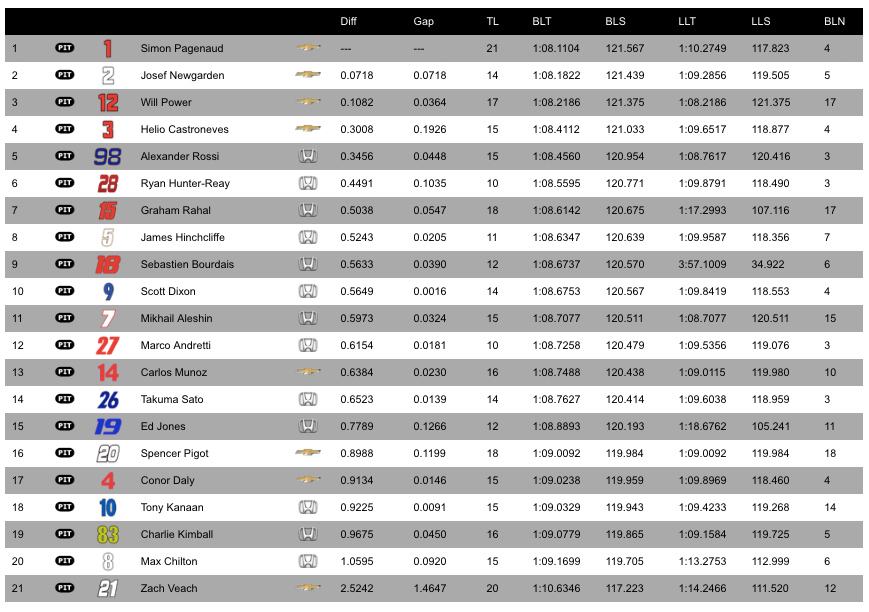