Verizon Team Penske’s Will Power led the way for much of the third practice for Sunday’s Honda Indy Grand Prix of Alabama. He was only briefly headed by teammates Helio Castroneves and Josef Newgarden, who each took turns at the top of the time sheets. However, Power quickly reclaimed the top spot with a lap of 1:06.995. It was also the only lap that dipped below the 1:07 mark.

Newgarden and Castroneves made it a Penske a 1-2-3 in practice, while Mikhail Aleshin was the top Honda driver in fourth. Simon Pagenaud ended up fifth, which put four Penske cars in the top five for the second time this weekend (the Penske quartet went 1-2-3-4 during opening practice on Friday, with Pagenaud leading the way).

The session ran without interruption, the lone incident coming in the form of a quick spin from Ryan Hunter-Reay, who went wide into the grass exiting turn 14 and spun back across the track in front of James Hinchcliffe. However, Hinchcliffe was able to slow himself down in plenty of time to avoid contact and both cars continued on, ending the session sixth (Hinchcliffe) and 11th (Hunter-Reay).

Times are below. Qualifying for Sunday’s Honda Indy Grand Prix of Alabama rolls off at 4:15 p.m. ET (3:15 local time). 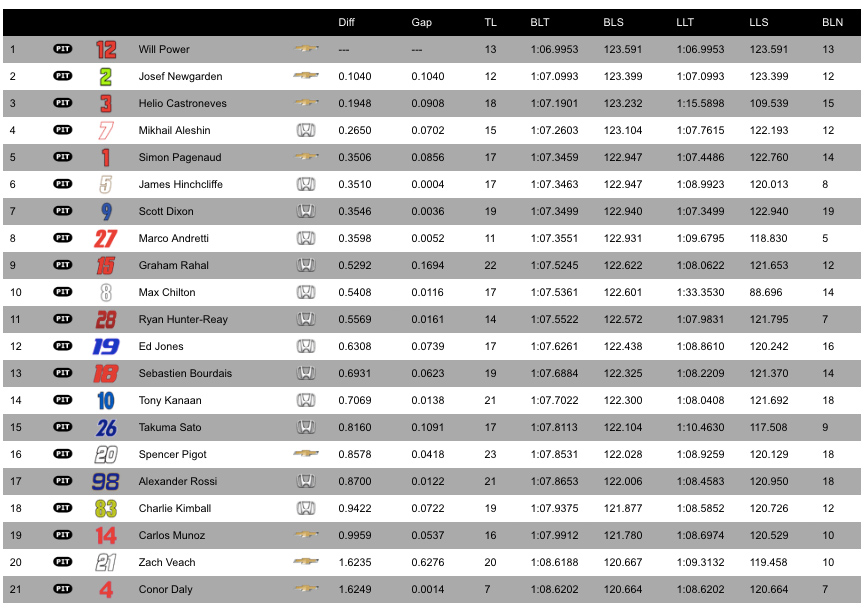