Mother Nature rolled in overnight and through the early morning at Barber Motorsports Park, dropping a lot of rain on the 2.38-mile road course. Conditions stayed wet during the Verizon IndyCar Series morning warmup, although the rain clouds had moved away by then and the track began drying out.

Marco Andretti led the way after changing to slick tires on his final run, which indicates how quickly the track dried out during the 30-minute session. Marco was the only driver to run slick tires and his quick lap of 1:14.37 was nearly 3.5 seconds quicker than second-place runner Scott Dixon. Alexander Rossi, Spencer Pigot, and Ryan Hunter-Reay completed the top five, while James Hinchcliffe, Mikhail Aleshin, and Zach Veach did not turn laps during the warmup.

Despite the tricky conditions, the session ran relatively cleanly. Helio Castroneves brought out a brief red flag when he went into the gravel trap in turn five, but he suffered no damage and continued on after getting a tow. Ed Jones also had a quick off-course excursion of his own between turns 12, 13, and 14, but he rejoined the track and continued. 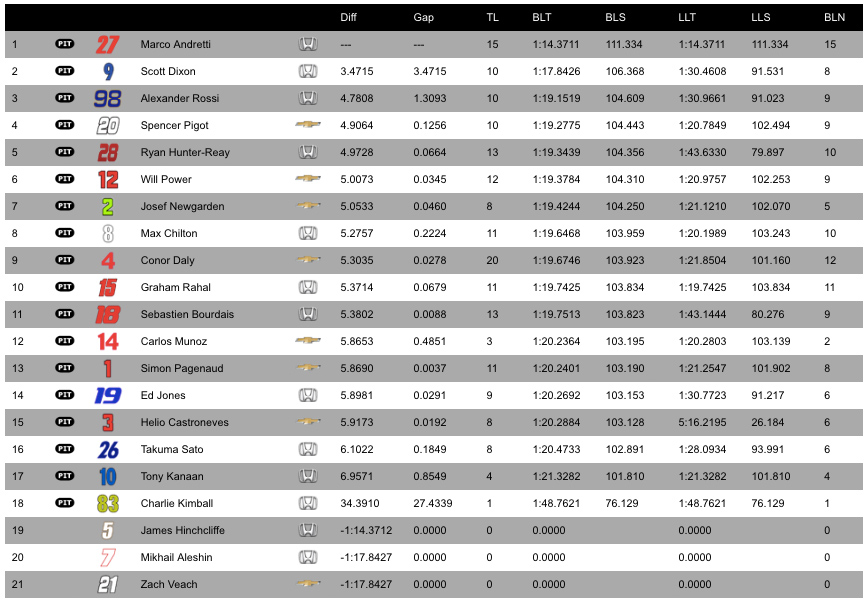