A Chevrolet topped the timesheets on the Verizon IndyCar Series’ first of two three-hour test sessions at Gateway Motorsports Park, but it might not be the one you’d guess at first.

Speeds mean little in a test like this but for Daly, who ran well at Phoenix on Saturday night before a gearbox issue cost him 70-plus laps in the pits and left him 14th, gaining information on short ovals is important. The Foyt team had not finalized its deal with Chevrolet the last time teams tested here in October, marking this both Daly’s and the team’s first running here.

“Our car was good in qualifying as we had the same mechanical balance. We just didn’t know how much to trim,” Daly told NBC Sports about his Phoenix race this weekend. “I was flat immediately. Maybe should have taken 1,000 or 1,500 pounds (of downforce out). It’s about gathering information. Carlos goes a little more trim and gets a little further. We’re taking these steps and we’re learning.”

“I really like Phoenix and these short ovals. Man, they’re physical though!”

Behind Daly, all five Team Penske Chevrolets were fixing to be second through sixth, but that was interrupted in the final few minutes of the session.

Josef Newgarden was second at 172.341 in the No. 2 hum by Verizon Team Penske Chevrolet, with month of May fifth driver Juan Pablo Montoya marking his second test of the year third in the newly liveried No. 22 Fitzgerald Glider Kits Chevrolet.

Phoenix winner Simon Pagenaud and Phoenix polesitter Helio Castroneves were next, followed by the first Honda of Scott Dixon, who ran only in the final five minutes of the session.

Ed Carpenter was seventh ahead of Will Power, with Sebastien Bourdais and Carlos Munoz completing the top 10.

Bourdais and Ed Jones are sharing Jones’ No. 19 Dale Coyne Racing Honda this test as Bourdais’ car sustained damage to all four corners and both sides of his No. 18 Sonny’s BBQ Honda in the first lap accident at Phoenix.

“It’s not tubbed, but it’s everything but the tub. We broke all four corners and both undertrays. It’s pretty bad,” Coyne said at Phoenix.

One car that did crash today was Phoenix third place man JR Hildebrand, who had his second accident of the season in testing. He’d also had one in the Phoenix test in February.

The driver of the No. 21 Fuzzy’s Vodka Chevrolet made contact with the SAFER barrier in Turn 2 and was done for the session.

“It’s windy out there and we were working our way through Turns 1 and 2,” Hildebrand said. “I thought there would be more grip rolling a little higher through the corner and there wasn’t. Collected the outside wall in (Turn 2). I thought I was out of (the throttle) forever. I tried to regain some grip going up the hill and it just didn’t grip. I’m frustrated for the team. An unnecessary thing to happen. Hopefully, we can get back out later today.”

Several yellow flags flew for track inspection and course repairs, which extended the three-hour session past its intended end time of 3 p.m. CT and local. A second three-hour session runs later today from 4 to 7 p.m., which will closer simulate race conditions for the evening race, the Bommarito Automotive Group 500 presented by Valvoline, set for August 26.

Beyond the 21 drivers that tested – Graham Rahal and Rahal Letterman Lanigan Racing did not appear – one other driver tested this morning.

Schmidt Peterson Motorsports third driver Jay Howard had his first run in an IndyCar since Las Vegas, 2011, which was canceled after 12 laps. Howard has had several false starts since but the Englishman took over James Hinchcliffe’s No. 5 Arrow Electronics Schmidt Peterson Motorsports Honda for his refresher running this morning. Howard will drive the No. 77 Team ONE Cure Honda with SPM, supported by the Tony Stewart Foundation, at the 101st Indianapolis 500 presented by PennGrade Motor Oil.

Times from this first test session are below. 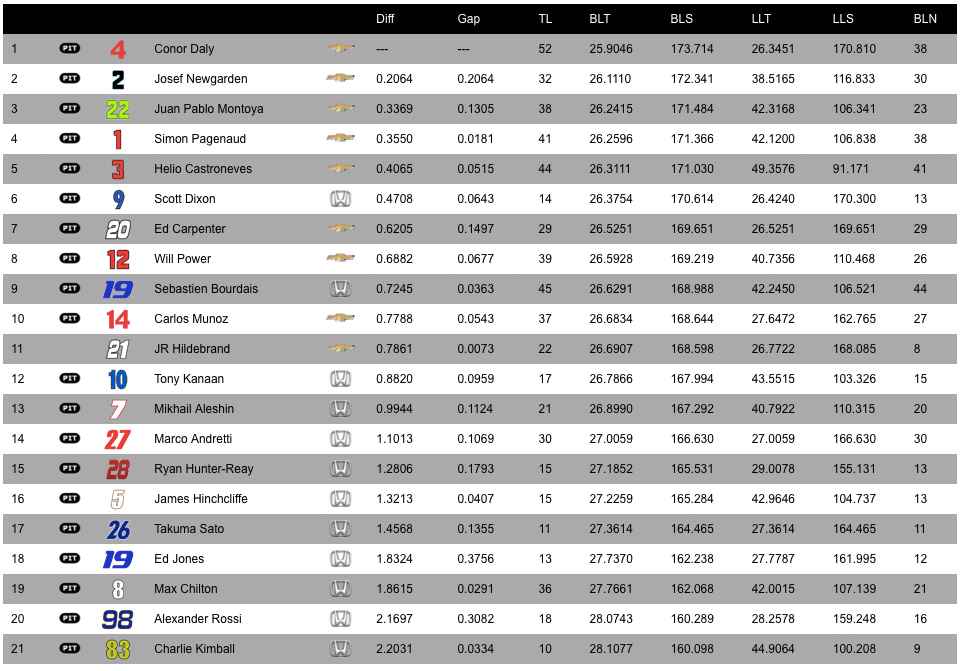