Chevrolet again topped the evening test session at Gateway Motorsports Park, and again the name at the top of the time sheets was somewhat of a surprise. Conor Daly backed up his speed from earlier in the day by again turning the fastest lap of the session, doing so at an average speed of 176.907 mph in the No. 4 ABC Supply Co. Chevrolet for AJ Foyt Racing.

Also like the first session, Daly led home an armada from Team Penske, with Helio Castroneves turning the fastest lap of that group and ending the session in second. Juan Montoya, Josef Newgarden, and Simon Pagenaud rounded out the top five.

Scott Dixon was the fastest Honda in sixth, while teammate Tony Kanaan was the only other Honda in the top ten (ninth) on a day in which the Chevrolet teams flexed their muscle.

The session saw only short bursts of running with several stoppages for track inspection, something Gateway Motorsports Park announced proactively via their twitter page just after running began.

We’ll be doing a series of short runs. Short breaks. Now 'til 7:30. Still time to leave work & come over to the track. Take the Stan Span.

Of note: JR Hildebrand, who crashed in the earlier session, did not return to the track, his Ed Carpenter Racing team unable to repair his car after the incident. Ryan Hunter-Reay and Takuma Sato also did not turn laps in the evening session.

Further, INDYCAR and Gateway battled endless tricky track conditions throughout the day. Prior to testing, over nine inches of rain fell in the days leading into the event, and the series and track battled weepers throughout the days. Conditions remained an issue in the evening, forcing the series to stop the running prematurely. INDYCAR and Gateway released the following statement regarding the stoppage.

“Gateway Motorsports Park and INDYCAR overcame tremendous challenges to conduct a successful series open test session today, despite 9.5 inches of rainfall in the two days leading up to the event. Officials worked tirelessly to prepare the racing surface, which included drilling holes to relieve pressure of ground water and additional proactive measures.”

The statement continued, “During the course of today’s practices, conditions developed that made it necessary to stop the test early, within an hour of the scheduled time. The conditions will be promptly addressed by INDYCAR and Gateway officials, and all are confident of a successful solution when the series returns to the track. It was a valuable day for teams to gather information for the race event in August, and a great day for the fans who attended and were able to see their favorite cars and drivers up close.

Times for the second session are below. The Verizon IndyCar Series returns to Gateway on August 26 for the Bommarito Automotive Group 500 presented by Valvoline. 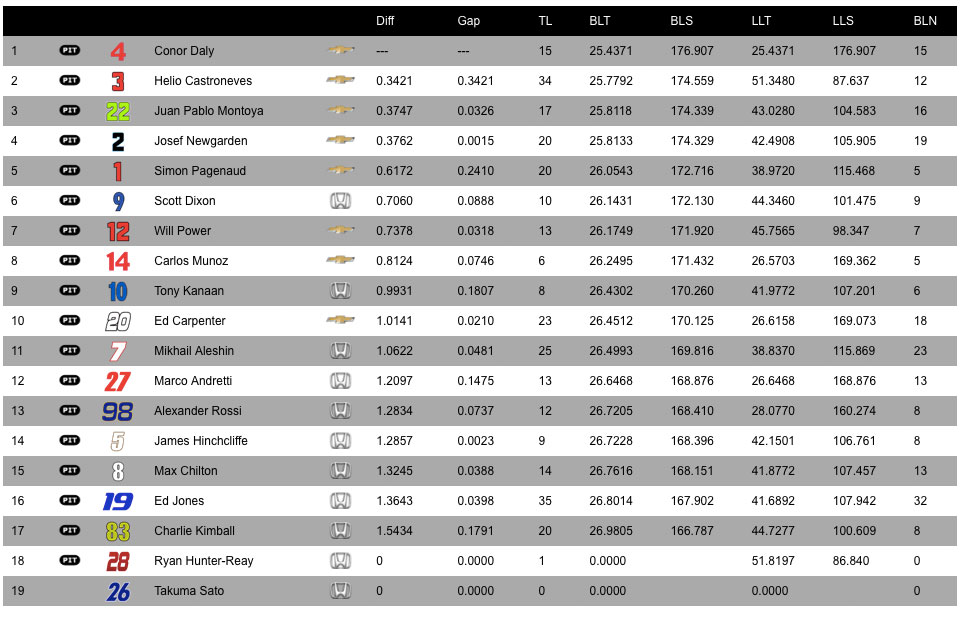