Hi everyone, this is Sage Karam, driver of the No. 24 Mecum Auctions Dreyer & Reinbold Racing Chevrolet Indy Car. It’s great to be back with NBCSports.com for the month of May.

I can’t tell you how excited I am about returning to the Indy 500. It’s always tough to sit around and wait for 11 months before you return to the greatest racing facility in the world, the Indianapolis Motor Speedway.

Last week, I was in Indy and was at the DRR shop for my annual seat fitting in the Dallara race car. It’s refreshing to see everyone back in the shop. Every year I come into the shop and see how the crew guys are preparing a strong car for the 500. The seat fitting part was pretty easy. I have the same seat from last year and we just needed to adjust the pedals, steering rack and the steering wheel. I felt very comfortable in the car immediately. 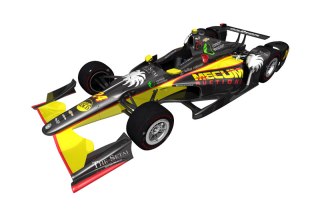 And this year, the No. 24 really looks great. The DRR guys really work hard to get their 500 prepared properly.

I was talking to Dennis (Reinbold, team owner) and Chase (Selman, team manager) this week and saying that I wish I didn’t have to wait a full year to get back to the 500. You think about this race a lot.

Especially when you know you had a fast car last year and we were running up front. We could have had a good result. It just makes you wanting to get your revenge back the next year.

I think seeing the specs for this year and they are similar to 2016. So that is very encouraging since we went from 23rd to fourth, just before the halfway mark. That gives me a lot of confidence coming into this year’s race with a similar DRR setup.

I feel great coming into the 101st Indy 500. If I have a car as good as last year’s race car, I feel I can be in position to win the race. That’s very exciting for me, the sponsors and the whole team.

Plus, I have been racing sports cars this year in the IMSA series with the 3GT Racing team and the Lexus program. Last year, I was with the Lexus road racing team but we didn’t race the car. So, the Indy 500 was my first race of 2016.

It feels good to have some races under my belt with Lexus this year including the Daytona 24, Sebring, Long Beach and COTA this weekend. I feel that doing those races has made me more relaxed behind the wheel coming to Indy.

Last year, without some racing before, I thought I got too anxious in the 500 when I was towards the front of the field. I really wanted to lead the race. Now, I know you don’t really need to get to the lead so soon. You need to be aggressive, but let the race play out more. It’s 200 laps.

I know I’ll be more relaxed this year coming to the 500. It will be my fourth Indy 500 and I have matured more than the previous years.

I’m so excited to be back with Mecum Auto Auctions at the 2017 Indy 500. It’s funny. I haven’t actually been to one of the Mecum Auctions because of other conflicts. But I watch the show on NBC Sports regularly. I’m a car guy like most people in the Indy 500 garage area.

They do some really cool stuff at those auctions and I plan to go to the one in Indy this month. It looks like a blast. The Indy Mecum show is at the Indiana State Fairgrounds from May 16-20.

A lot of drivers have to work with some sponsors that aren’t too exciting for them. But I can tell you that the Mecum sponsorship gets me very pumped up because of my interest in their cars.

To work with a sponsor which has some very historic and amazing machinery is very cool for me. We want to make sure that our No. 24 Mecum Auctions Chevrolet looks good all month for them too.

People always ask me why we don’t run the Indy Grand Prix (May 12-13) with DRR. And I would like to do it again. But our total concentration is on the Indy 500. Dennis’ family has been a fixture at Indy since the 1920s and 1930s. This race means so much to he and his family. Plus it does to me too. It’s the biggest auto race in the world. So we want to be primed for a good program for the 500.

We want to give the crew a full week of massaging on the car. Plus we could damage the car in the Grand Prix too. I get a little antsy not being in the GP, but I know it’s for the best sitting it out.

As a rookie, I was able to finish but I really didn’t know what I was doing from a racecraft standpoint. I was just driving the car as fast as I could. I look back at it and still shake my head. It’s interesting to see behind the scenes now after three years and going into my fourth this month. I have made mistakes at Indy. I’ve crashed on the first lap. I’ve crashed at the halfway point. I think I know where I need to be and when I need to be there in the race. I want to complete all 200 laps again, and be in position to fight for the win.

This is the most confident I have felt in my time coming to the 500. Because I know we can run up front now. I know the team is capable of winning this race.

I feel we have everything we need to put the No. 24 Mecum Auctions Chevy in victory lane. That would be my dream.