INDIANAPOLIS – Will Power is two-for-two in leading practice sessions for this weekend’s INDYCAR Grand Prix from the Indianapolis Motor Speedway road course.

After pacing the morning session, Power again led this afternoon in the No. 12 Verizon Team Penske Chevrolet at 1:07.7684, with this time set on Firestone’s new red alternate tires. The existing track record is 1:08.6746 set by Power last year in Q1 last year.

Josef Newgarden was second ahead of Juan Pablo Montoya, Alexander Rossi (the top Honda) and Helio Castroneves in a Team Penske-dominated session, where four of the five Penske entries were in the top five.

The only one who wasn’t, points leader, Phoenix winner and defending race and series champion Simon Pagenaud, was eighth in the session. He and Rossi appeared to have a moment going into Turn 7 with Pagenaud to Rossi’s outside, but the two drivers emerged unscathed.

Other incidents during the session were Ryan Hunter-Reay stopping on track with the crew reporting him out of fuel and Carlos Munoz going off course in a spin near the end of the session. 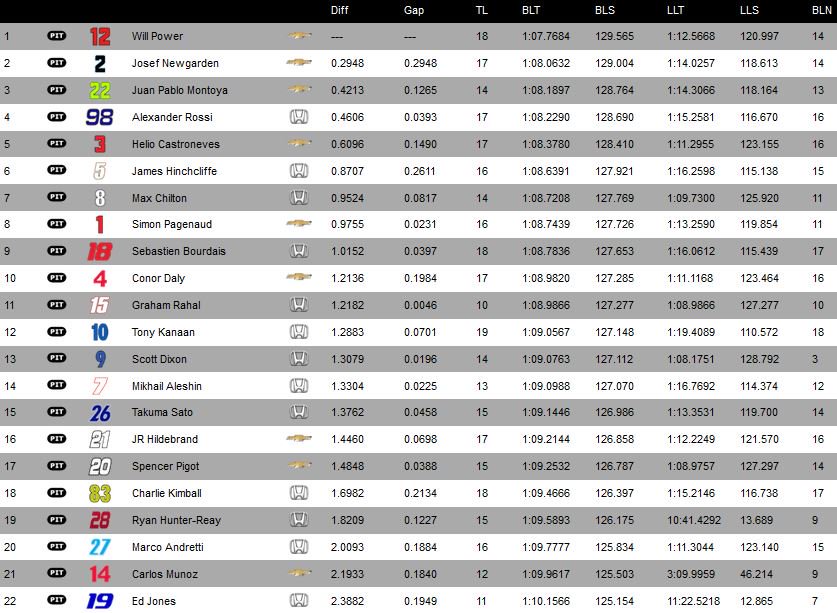