What’s more, Power set a track record with a lap of 1:07.704, eclipsing his own mark, and doing so on a set of used alternatire tires. “The car was great on used tires, and I thought on the new tires, I had a bit of understeer. I thought that it would really come in on used tires. In the Firestone Fast Six the car had a fantastic balance and did a really neat lap,” he said of his run to the pole.

Power, who has endured a difficult start to the year, acknowledged that if he and the No. 12 Verizon Team Penske group keep putting themselves near the front of the field, strong results will eventually come. “Really cool to start at the front again, really determined to have a good race. I’ve been knocking on the door every week, and one is going to go our way here soon. You put yourself in that position, it’ll happen. That’s the plan,” he explained.

Power led teammates Helio Castroneves and Josef Newgarden to make it a Team Penske 1-2-3 in qualifying. The returning Juan Pablo Montoya qualified fifth, making it four Penske cars in the top five to complete a dominating Friday for Roger Penske’s outfit. Simon Pagenaud (7th) was the only Penske driver to miss the Firestone Fast Six.

The last time Penske had four cars make the Firestone Fast Six was at last year’s GoPro Grand Prix of Sonoma, when Simon Pagenaud led Castroneves, Montoya, and Power to the green flag in a 1-2-3-4 sweep of qualifying. Further, Team Penske has captured pole in each of the five races so far in the 2017 Verizon IndyCar Series season, the third consecutive year in which they’ve done so.

Scott Dixon (4th, for Chip Ganassi Racing) and Sebastien Bourdais (6th, for Dale Coyne Racing) were the only non-Penske cars in the top six, with Dixon leading the way for the Honda teams.

Qualifying results are below. Saturday’s INDYCAR Grand Prix rolls off at 3:30 p.m. ET. 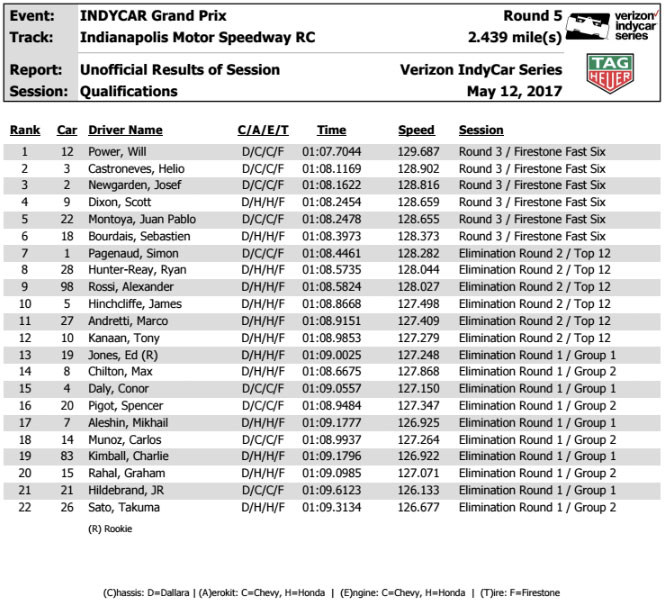