INDIANAPOLIS – Will Power took the lead in the first stanza, Helio Castroneves the second, Power the third and additionally the last en route to winning the warmup act for the 101st Indianapolis 500 presented by PennGrade Motor Oil, Saturday’s INDYCAR Grand Prix from the Indianapolis Motor Speedway, Round 5 of the Verizon IndyCar Series season.

More importantly, it also caps off a weekend where Power led every session. He paced first and second practice, qualifying where he took his 47th career pole position, and this morning warmup, before leading 61 of 85 laps.

The win means there are now five winners in as many races this season, as Power broke through for the first time since Pocono last August. This is Power’s second INDYCAR Grand Prix win after also winning in similar dominant fashion in 2015, when he led 65 of 82 laps.

Power joked yesterday he hoped all race weekends would adopt this abnormal format as part of a two-day weekend schedule, but after the way he performed this weekend, he might well be bloody serious.

“It was definitely — you know, you’re on the toes all day because you had the autograph session in between and then some appearances. I didn’t mind it,” Power said. “If you can get on it pretty quickly, it’s good. But if you were here — yeah, obviously it worked out for me, so we should keep doing this.

“I don’t think it mattered. I mean, yeah, all the sessions have been 40 — yeah, it’s good to have a night to think about it before qualifying, but definitely shortens the weekend up.”

As the run to the notorious and treacherous first corner was done without incident, it meant there was less chance of a caution happening. Only seven have happened in three years.

Today’s race ran caution-free, the first in IndyCar since Long Beach 2016, and was almost entirely dictated by pit strategy. Although the race was lengthened three laps this year from 82 to 85 laps, it made little difference to the grand scheme of things.

There wasn’t much in the way of on-track passing, either. Scott Dixon made a good move on Castroneves for second on Lap 69, at the inside of Turn 7. But with Dixon on Firestone’s red alternate tires and Roger Penske opting to put Castroneves onto the primary black sidewall tires for the final stint, it was always a question of when rather than if he’d get around him.

On Lap 74, Castroneves lost his podium position as Ryan Hunter-Reay passed him on the inside of Turn 7. Simon Pagenaud got Castroneves later as well for fourth.

Behind the top five, it was Graham Rahal, Max Chilton, Alexander Rossi, Spencer Pigot and Juan Pablo Montoya in the top 10.

Charlie Kimball and Sebastien Bourdais went out early with mechanical problems, both stopping on the oval Turn 4. 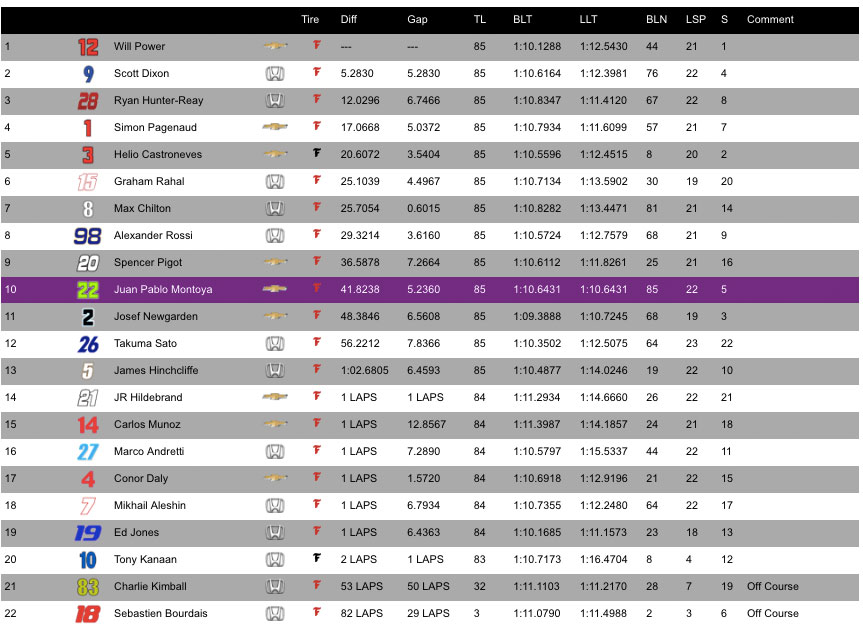