INDIANAPOLIS – One Andretti Autosport driver dominated the headlines and another topped the speed charts in the opening day of 101st Indianapolis 500 presented by PennGrade Motor Oil practice.

Marco Andretti was fastest on the day with a best speed of 226.338 mph at the Indianapolis Motor Speedway, driving the No. 27 United Fiber & Data Honda.

That speed is down a bit from last year’s first day, because temperatures were up. After starting in the mid-to-high 70 degree range, it’s now risen into the mid-to-high 80 degree bracket.

Four of the six Andretti drivers – the four full-season entries – completed their first “mini race” of the month in the final 10 minutes of practice.

The story of the two one-off additions, however, were interesting side notes.

Fernando Alonso paced the Rookie Orientation Program and refresher program in the morning, and then ran another 20 laps in the afternoon in his No. 29 McLaren Honda Andretti entry.

Meanwhile, Jack Harvey’s day was cut short with the first incident of the month in the No. 50 Michael Shank Racing with Andretti Autosport entry, exiting Turn 2.

Graham Rahal also had an issue today with smoke billowing out the back of his No. 15 Steak ‘n Shake Rahal Letterman Lanigan Honda in the final hour of practice. 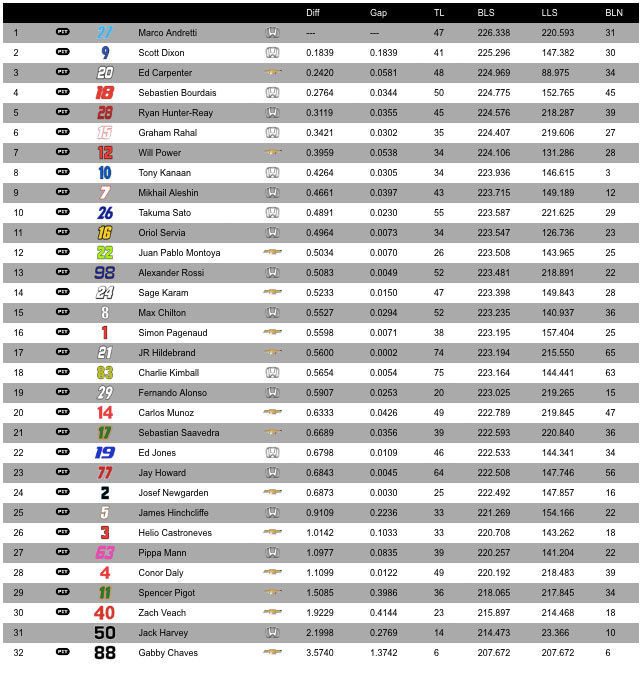