INDIANAPOLIS – It’s no secret the Indianapolis 500 is the Verizon IndyCar Series’ biggest race.

It can make or break your career – look at how two laps decided the 2011 and 2016 Indianapolis 500s. Where would JR Hildebrand and Alexander Rossi’s respective careers be if the last laps didn’t play out the way they did?

What it also does in an in-season standpoint is drastically alter the championship, because with double points for the race and nearly a full race of points on offer for qualifying, it can produce some seismic swings in the championship.

Rossi, Munoz and Newgarden eventually ended the year 11th, 10th and fourth in points, so while they dropped a bit from where they were at time of their top-three finish in the Indianapolis 500, it still produced a net benefit to their season.

The other three? Montoya needed a third place at Sonoma, also a double points race, to springboard back from 14th to eighth, while Hunter-Reay (12th) and Daly (18th) each only moved up one position the rest of the season.

The single most fascinating stat between Rossi and Daly is that in the two double-points races, Rossi scored 184 points (first and fifth) and Daly scored 38 (29th and 21st).

That 146-point gap from two races singlehandedly swung the Sunoco Rookie-of-the-Year honors to Rossi, as the overall gap in all 16 races was 117 points (430 to 313), meaning Daly scored 29 more points in the other 14 single-points races.

Simply put, a great month of May can do wonders for your season as a whole, and a bad one can put pause to it.

Box scores from last year’s Grand Prix and Indianapolis 500 are linked below so you can see who moved where within the one-race span.

It’s also worth noting that Simon Pagenaud, who had electrical gremlins sabotage his Indianapolis 500, was lucky to escape the double points race and qualifying still with a points lead despite a 19th-place finish. Yes, his lead was cut from 76 to 57 points, but no one got within 20 points of him the rest of the way, and that was key to his eventual run to the championship.

Here’s the box score from this year’s INDYCAR Grand Prix, to give an idea of points heading into the Indianapolis 500 qualifying and race sessions.

Saturday’s qualifying sets the Fast Nine runners for Sunday, but it does not set the actual grid itself, nor does it award points.

That all comes Sunday, with runners 10-33 qualifying first and then finalizing their grid positions, before runners 1-9 do so in a one-run only shootout to determine the pole winner.

Per INDYCAR’s rulebook, here’s the points breakdown for this race and qualifying, below: 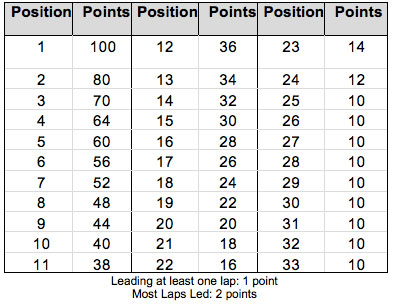 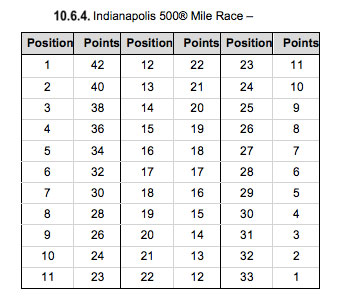 Also, entrant and driver points will be awarded for Indianapolis 500 qualifying based on final qualifying results as follows: