Team Penske surged to the front on Day 2 of practice for the 101st Indianapolis 500 Presented by PennGrade Motor Oil. Will Power put his No. 12 Verizon Team Penske Chevrolet atop the speed charts with a best lap of 224.656 mph. He led teammate Helio Castroneves, in the No. 3 Shell Fuel Rewards Chevrolet, who had a best lap of224.287 mph.

Gabby Chaves impressed in the No. 88 Harding Racing Chevrolet by turning the third fastest time of the day, doing so in the final minutes. Ryan Hunter-Reay was the top Honda, his No. 28 DHL entry for Andretti Autosport in fourth, while Sage Karam’s No. 24 Mecum Auctions Chevrolet for Dreyer and Reinbold Racing placed fifth, putting four Chevrolets in the top five.

However, a look at the no-tow speeds delivers a more balanced picture on the day. Ed Carpenter, in the No. 20 Fuzzy’s Vodka Chevrolet for Ed Carpenter Racing, had the fastest no-tow lap of 222.842 mph. He was followed by Charlie Kimball’s No. 83 Tresiba Honda for Chip Ganassi Racing. JR Hildebrand, Will Power, and Scott Dixon completed the top five, with Juan Pablo Montoya, Sebastien Bourdais, Simon Pagenaud, Alexander Rossi, and Tony Kanaan completing the top ten. That put Honda and Chevrolet on an equal five drivers apiece in the top ten of the no-tow speeds.

Overall, speeds continue to be down from this time last year, again due to weather. Today’s temperatures peaked in the mid-to-high 80 degree bracket once more, with track temperatures around or above 125 degrees.

Ed Jones was the fastest rookie of the day, turning the 15th quickest lap at 222.251 mph. Zach Veach (22nd), Fernando Alonso (24th), and Jack Harvey (31st) rounded out the rookie class, with Harvey completing his Rookie Orientation program in the afternoon.

Alonso’s learning curve continued as he clocked in 117 laps, more than half of a race distance, and even engaged in some slip-streaming mini-battles.

Overall times for Day 2 of practice are below. 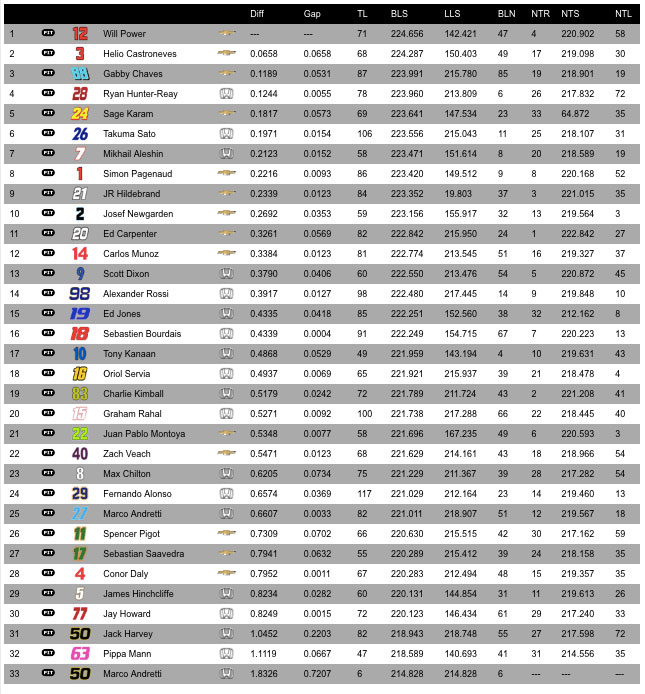 No-tow speeds for Day 2 are below. 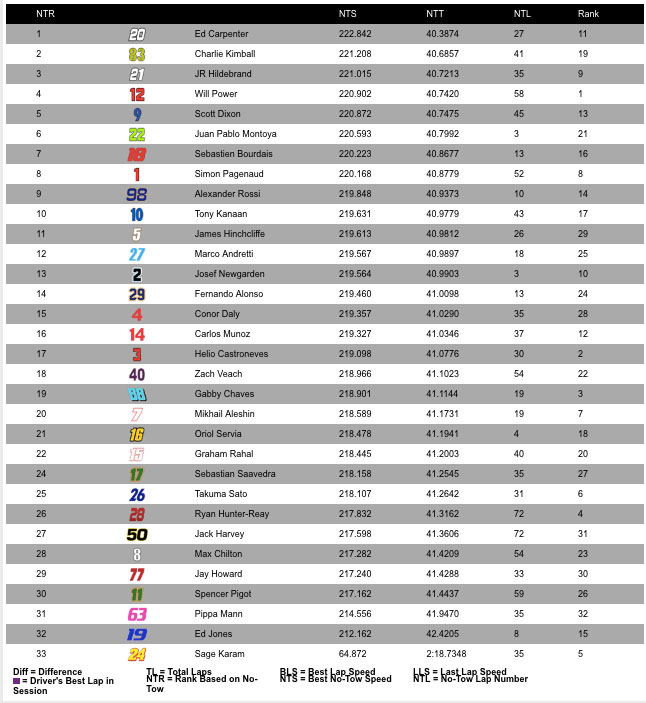