INDIANAPOLIS – The third Schmidt Peterson Motorsports Honda entered into this year’s 101st Indianapolis 500 presented by PennGrade Motor Oil is more known for its supporting partner, in Tony Stewart and his foundation’s Team One Cure program.

However, the driver wheeling said No. 77 car was the surprise story of the day on a frenetic Thursday of action at the Indianapolis Motor Speedway: Jay Howard.

The 36-year-old Englishman, who’s spent six years out since his last Verizon IndyCar Series starts in 2011 and now runs F4 and go-kart teams, got a monster tow in the first 30 minutes of six hours of running to lead the timesheets with what is the fastest lap of the month thus far at 226.744 mph.

Stewart was in attendance on the day along with a couple notable others in the SPM pit, including past Chili Bowl winner Rico Abreu.

One of their teammates, Takuma Sato in the No. 26 Andretti Autosport Honda, topped the no-tow charts at 224.734 mph, and that ranked him ninth in the field.

More than 2,000 laps (2,362) were turned in what was the busiest day of the week by far, with action coming hot and heavy in the opening two hours and the last two hours.

What was meant to be a bunch of qualifying simulations, however, turned into a mock race in the last hour of the day.

It was a frenetic amount of action as drivers slotted in-and-out of running, all gauging where and when to make their moves for position. Temperatures started in the low-80s today and ticked up to the mid-80s, with track temperatures in the mid-110s to low-120s, so it made for good race condition simulations.

Several drivers topped the 100-lap mark on the day. Helio Castroneves, Will Power and James Hinchcliffe were over 100 laps banked while others such as Fernando Alonso, Charlie Kimball and Jack Harvey were in the 90-lap completed mark.

Alonso’s day in the No. 29 McLaren Honda Andretti entry saw him provide a number of highlights, both with his running in traffic and his lines set in single-car running. On the whole, he ended fourth at 225.619 mph for his best lap yet, while his no-tow speed was no slouch either – it was 223.687 mph.

Josef Newgarden’s day ended early with a crash in the first couple hours of running. He was checked, released and cleared to drive but the No. 2 hum by Verizon Team Penske Chevrolet was not as fortunate. After the accident, Newgarden was done for the day.

Another driver whose day was cut short was Sebastien Bourdais with another Honda engine issue in the back of his No. 18 Dale Coyne Racing Honda. The Frenchman had a similar issue during the INDYCAR Grand Prix at the weekend, and coupled with Graham Rahal’s failure earlier this week, it’s been a week where reliability has been a talking point just as much as outright speed.

The 33rd and final driver set to enter this year’s race, Buddy Lazier, made it out for installation laps in his renumbered No. 44 Lazier Racing Partners Chevrolet, following a build during the week of his car by the small, family-run, Vail, Col.-based team.

The boost is set to be increased for Friday’s scheduled Fast Friday running from noon until 6 p.m., however weather may intervene and limit or halt running altogether. 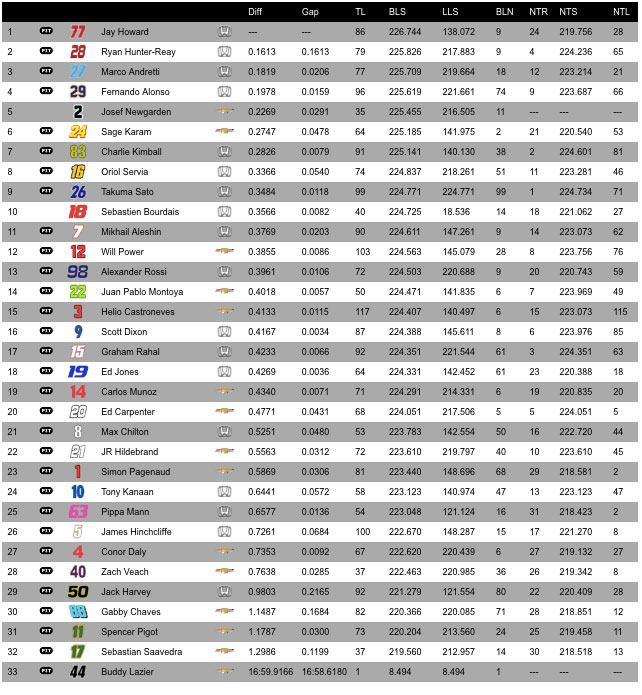 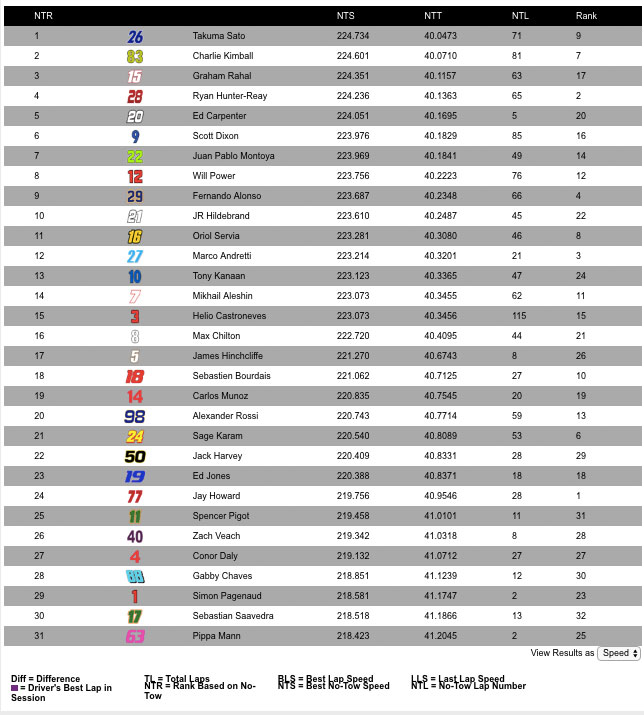