INDIANAPOLIS – Ed Carpenter uncorked a late four-lap average of 230.458 mph in his No. 20 Fuzzy’s Vodka Chevrolet to defeat the noise and speed coming from Honda this week, to take the top spot in the first day of qualifying for next Sunday’s 101st Indianapolis 500 presented by PennGrade Motor Oil.

With four incredibly consistent laps – all in the 39.0 second range – Carpenter, Ed Carpenter Racing teammate JR Hildebrand and Will Power were the three drivers in Chevrolets who made it into the Fast Nine shootout, and will thus compete for the pole position on Sunday.

Carpenter trimmed out with no winglets on his rear wing assembly.

Takuma Sato led the Honda runners at 230.382 mph, continuing a solid week in the No. 26 Andretti Autosport Honda, and was second.

Scott Dixon was third, the early leader in the No. 9 NTT Data Honda for Chip Ganassi Racing at 230.333.

Fernando Alonso, the media star of the week, has lived up to the hype and made the Fast Nine Shootout in the No. 29 McLaren Honda Andretti entry. With a four-lap average of 230.034 mph, he was seventh.

Splitting Dixon – the four-time IndyCar champion and Alonso – the two-time Formula 1 World Champion, were Hildebrand in fourth, Alexander Rossi and Power in sixth.

After Alonso, Tony Kanaan and Marco Andretti also made it in.

The day was marred by a heavy accident for Sebastien Bourdais, who was reported awake & alert, having never lost consciousness, and transported to IU Methodist hospital. Bourdais uncorked two 231-plus mph laps, looking poised for provisional pole in the No. 18 GEICO Honda for Dale Coyne Racing, before his car came around and crashed heavily into the Turn 2 wall. 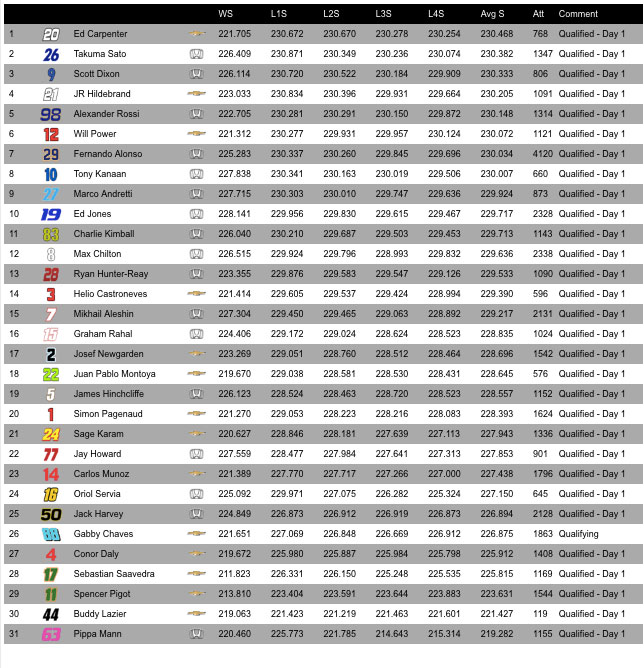