INDIANAPOLIS – Rain is expected to hit the Indianapolis Motor Speedway later today, which would push qualifying back during the day schedule or into tomorrow.

Practice is underway for two groups this morning, with a guaranteed 20 minutes of run time confirmed for each group. Because the session was on a slight hold to start, that pushed the scheduled times back a bit.

The groups are separated as follows:

In layman’s terms, the easiest way to explain qualifying is that from the qualifying draw, it goes in order from there by primary cars (very few teams will qualify a backup car) and then it will shift into whether teams go into a line to make a second attempt. So although Sebastian Saavedra’s No. 17T AFS Chevrolet for Juncos Racing has the first draw, second-drawn Pippa Mann in the No. 63 Dale Coyne Racing Honda would be the first primary car to make an attempt.

The Fast Nine is meant to be set on the first day of qualifying. Speeds from today don’t count for anything, except who makes the Fast Nine and who will slot in in spots 10-33 thereafter, as speeds are wiped out.

However, if rain arrives as expected, INDYCAR will provide updates on the qualifying status as they become available.

The qualifying draw is linked below, followed by the infographic that explains how qualifying works. 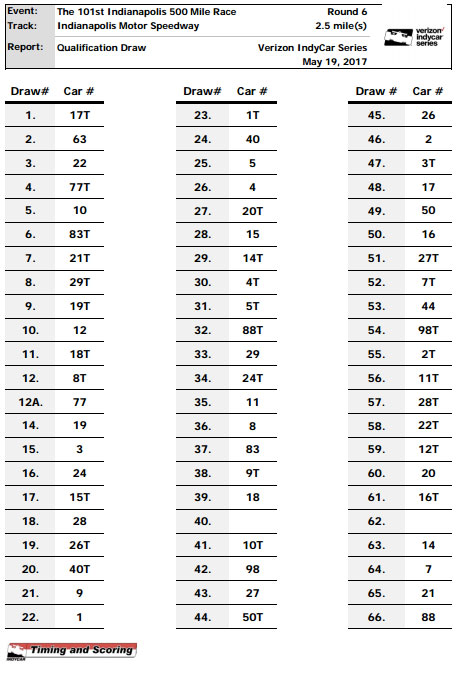 In other notes from around the paddock yesterday and this morning: