INDIANAPOLIS – Inarguably the best all-around driver in the Verizon IndyCar Series delivered inarguably one of his finest performances of his career.

Scott Dixon crushed qualifying for the 101st Indianapolis 500 presented by PennGrade Motor Oil, with a four-lap average at 232.164 mph in the No. 9 NTT Data Honda for Chip Ganassi Racing. Dixon’s is the fastest run at IMS since Arie Luyendyk’s record four-lap average of 236.986 mph in 1996.

Dixon was the third-to-last car to run and held off the final two bullets in the gun, Takuma Sato and Ed Carpenter, in order to secure the top spot for the greatest spectacle in racing, 2017 edition.

“It feels so good,” Dixon told ABC’s Rick DeBruhl. “I did have to lift, but that first lap was just huge. This season has started so great. The emotions are so crazy. Hopefully we can repeat 2008, when we won from pole.”

Carpenter, who was fastest Saturday in the No. 20 Fuzzy’s Vodka Chevrolet, came up second at 231.664 mph while defending Indianapolis 500 champion Alexander Rossi, in the No. 98 NAPA Auto Parts/Curb Honda, has his first front row start in IndyCar in third place at 231.487 mph, a four-lap average fast enough to briefly hold the pole before Dixon toppled it.

Meanwhile two-time Formula 1 World Champion Fernando Alonso will start fifth in the No. 29 McLaren Honda Andretti entry after the first 231-plus mph in qualifying, at 231.300 mph.

The Fast Nine shootout took place under sunny skies and with a big question of whether anyone could topple Saturday pacesetter Carpenter, or the armada from Andrett.

Will Power was first to take a shot at that mark but came up short, with only a 230.200 mph average in the No. 12 Verizon Team Penske Chevrolet.

While Power ran a left rear winglet off his rear wing assembly, JR Hildebrand did not in the No. 21 Preferred Freezer Chevrolet. With a major slide in Turn 2 on his final lap, Hildebrand’s first three laps of 230.9 or higher dropped to a 230.081 on the fourth, which dropped the average to 230.889 mph and slotted him behind the Andretti teammates.

After being a victim of a bad qualifying position early on Saturday, Ryan Hunter-Reay was unable to make the Fast Nine shootout. But the driver of the No. 28 DHL Honda made up for it in a big way with a four-lap average of 231.442 mph, which was the fastest of qualifying to date until the shootout.

“That was crazy,” Hunter-Reay told ABC’s Rick DeBruhl. “It was white knuckle; I don’t think I took a breath. It’s a shame we’re not in the Fast Nine. But it doesn’t matter. It’s the Indy 500 next Sunday. The 28 crew, DHL, everyone at Andretti Autosport.

“We’ve had a great car all week. Let’s transfer that. Hi to the family at home, type of thing. Next Sunday is what matters. I want Andretti Autosport to get a pole even if I’m not part of it.”

Another driver unable to make the Fast Nine in disappointing fashion was rookie Ed Jones, who’s had a quietly great week in the No. 19 Boy Scouts of America Honda for Dale Coyne Racing. The Dubai-based Brit will start 11th with a four-lap average of 230.578 mph, one of only two drivers in this group (Hunter-Reay) who ran all four of their laps over 230 mph. And from a historical perspective, rookie Alexander Rossi won this race from 11th last year. Jones will, at a minimum, be looking to supplant Alonso as Indianapolis 500 rookie-of-the-year, and has delivered Coyne its best ever Indianapolis 500 starting position. The late Justin Wilson started 14th in both 2013 and 2014.

Completing Row 4 with a solid improvement from Saturday to Sunday was Oriol Servia in the No. 16 Manitowoc Honda for Rahal Letterman Lanigan Racing. The Catalan leapt from 227.150 mph to 230.309 mph in one day. Servia is set for his 200th career Verizon IndyCar Series start next Sunday.

Team Penske’s struggles stood out from there. Both Simon Pagenaud and Josef Newgarden were slower today than they were yesterday, two of only four drivers in this group who were slower on average (Sebastian Saavedra endured a weird 211 mph lap and Jack Harvey hit the Turn 2 wall, but kept his foot planted). With starting positions of 18th (Juan Pablo Montoya), 19th (Helio Castroneves), 22nd (Newgarden) and 23rd (Pagenaud), four of the Team Penske five-pack of cars have their work cut out for them next Sunday.

Elsewhere Pippa Mann bounced back nicely after a 219.282 mph run up to 225.008 mph in the third Dale Coyne Racing car and will start 28th. Buddy Lazier improved his speed by a full two mph and will start 30th – his first time off the last row in five starts since 2007 – and Zach Veach made it out for his first qualifying attempt in the rebuilt third AJ Foyt Racing Chevrolet.

The No. 18 Dale Coyne Racing Honda, now set to be driven by James Davison, did not make a qualifying attempt. INDYCAR President of Competition and Operations Jay Frye confirmed to NBC Sports that although there was no completed attempt, Sebastien Bourdais’ attempt on Saturday counted for qualifications.

It presents a slight oddity whereby the 33rd starting car will not have a qualifying speed for a second straight year. After a crash in qualifying last year, Alex Tagliani did not post a speed, and rolled off stone last.

Speeds are below for this group. 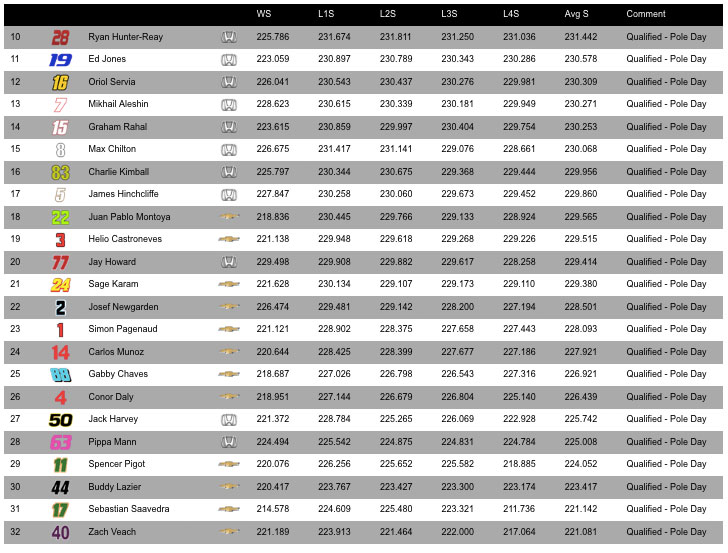