INDIANAPOLIS – The Freedom 100 will run for the 15th time as part of NBCSN’s Carb Day coverage, which begins Friday at 11 a.m. ET on NBCSN with the marquee race of the Indy Lights Presented by Cooper Tires season at 12:30 p.m. ET.

Known for its scintillating action and incredible finishes, Indy Lights seems set to deliver more of the same of that this go-around, after a pair of 90-minute test sessions held today at the Indianapolis Motor Speedway.

With a tow-assisted lap of 200.070 mph in the No. 98 Andretti/Steinbrenner Racing Dallara IL-15 Mazda, Colton Herta topped the combined speed charts. This will be the 17-year-old’s first big oval race, after only testing at Homestead-Miami Speedway over the winter.

“The draft was the same in the straight-line everywhere,” Herta said. “Obviously, it was a bit more here [rather than Homestead] since we’re going quicker at Indianapolis.

“The main thing is slipstreaming in the corners. It’s really different from anything I’ve experienced, especially when you’re right behind someone and you put half of a wing out or a quarter of the wing out.

“The balance shift is massive. That’s obviously going to be something all the rookies will have to get used to. I would say down the straights, it’s nothing too different.

“It’s really crazy when you pull out of the slipstream, how far your head will move down in the car. You get pushed down so much with the wind, and that’s probably the biggest difference I’ve felt. You feel like you’re going that fast the first few laps, but once you kind of get into it, the other cars around you move at a similar pace, so I don’t really think about it. But, it feels good to break the 200 mark.”

After a wild evening @IndyLights test session, @ColtonHerta radios "Did I win?!"

Herta’s speed was on display while the race craft of the other 13 drivers competing was also featured prominently on Monday.

Herta is one of seven rookies set to compete in his first Freedom 100, the others being Belardi Auto Racing’s Aaron Telitz (the Mazda Scholarship recipient), Ryan Norman and Nico Jamin also of Andretti Autosport, Matheus Leist and Garth Rickards of Carlin and Nicolas Dapero of Juncos Racing.

Dapero had a spin towards the end of the second test session as when trying to pass Andretti’s Dalton Kellett, he lost control of his No. 31 Juncos Racing entry and did a 360-degree pirouette and spin. The young Argentine contacted the inside wall but sustained only front wing damage.

The veterans will look to succeed on Friday. Juan Piedrahita looked racey today in his No. 2 Team Pelfrey machine; the Colombian, who made his 100th career start on the Mazda Road to Indy presented by Cooper Tires last time out at the IMS road course, nearly won this race last year.

The other veterans include Kyle Kaiser, the points leader for Juncos, along with Santiago Urrutia (Belardi with SPM), Shelby Blackstock (Belardi), Neil Alberico and Zachary Claman De Melo (Carlin).

Jamin, Kellett, Kaiser and Alberico (pictured below from left to right) were all on hand at a premiere of “Indy Light” beer at Metazoa Brewing Company in downtown Indianapolis last week. 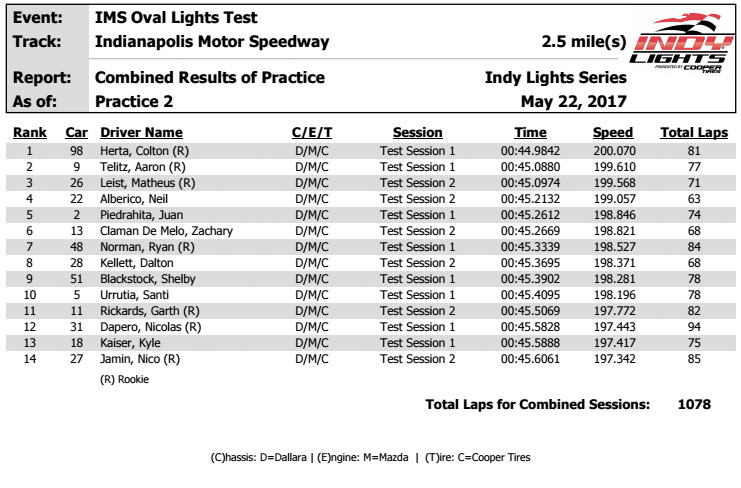