The Englishman in the No. 8 Gallagher Honda for Chip Ganassi Racing posted a best speed of 228.592 mph with Jones, the Dubai-based Brit in the No. 19 Boy Scouts of America Honda, in at 228.116 mph for Dale Coyne Racing.

These speeds were set earlier in the running, a three-and-a-half hour session from 12:30 to 4 p.m. ET, with significant tows. The turbocharger boost has been turned back down to race levels after being brought up for “Fast Friday” practice and qualifying over the last three days.

One-lap speed was not as outright important as consistent running over the length of stints, your car’s ability to carve through traffic, or managing falloff on tires.

Lap count is also something to look for on a day like this, and in the time on track there were a whopping 2,705 laps turned between all 33 drivers in a heavy day of running that clearly simulated a race. Seven yellows for more than 50 minutes prevented that number from surpassing 3,000.

Some of the heaviest runners included:

There were a number of hairy moments throughout the day as drivers ran in packs of about 10 or 12 cars or more. Race speeds were anywhere in the 215 to 223 or 224 mph ballpark.

James Davison made his first running in the No. 18 GEICO Honda for Dale Coyne Racing. Davison had a half hour to get up to speed for his first laps in an IndyCar in two years on his own, and made more than 20 laps, before joining the rest of the field from 12:30 p.m. ET. His best speed on the day was after 88 total laps.

Oriol Servia sustained another Honda engine failure when coming out of Turn 4, with a significant plume of smoke emerging from the back of his No. 16 Manitowoc Honda for Rahal Letterman Lanigan Racing. That ended his session early. 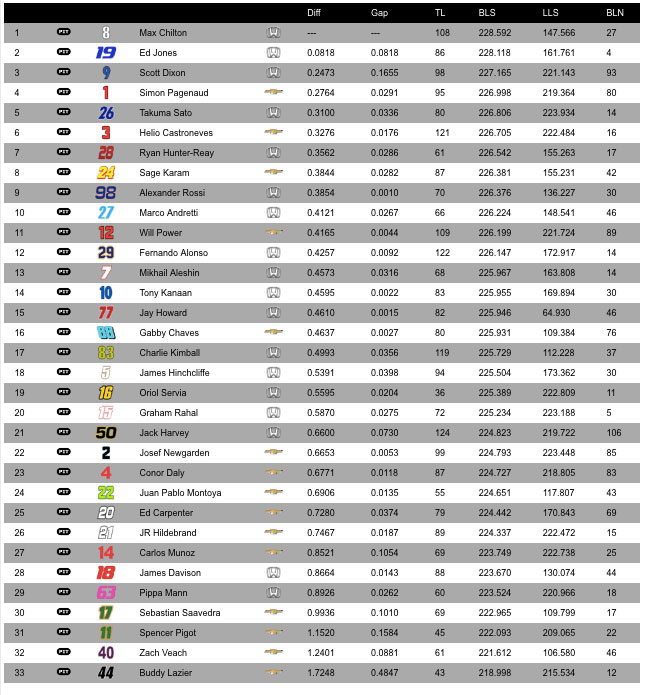