INDIANAPOLIS – Similar to last year, an Andretti Autosport driver that wasn’t the most discussed or fastest has won the Indianapolis 500.

But like Alexander Rossi last year, Takuma Sato flew under-the-radar all month, then delivered the goods when it mattered most.

After his best month yet at Indianapolis, bravery and tenacity has won Sato the 2017 101st Indianapolis 500 presented by PennGrade Motor Oil, driving the No. 26 Ruoff Home Mortgage Honda for Andretti Autosport.

And for Helio Castroneves, finishing second leaves him again, one spot short of his elusive fourth victory with Team Penske in the No. 3 Shell Fuel Rewards Chevrolet

Meanwhile Fernando Alonso had an engine issue that took him out from a star drive, and Scott Dixon survived a crazy accident early on despite going airborne.

This was a crazy race because it had 11 yellow flag periods and 15 different leaders, a record.

Sato started fourth and was one of four Andretti Autosport cars that seemed poised to contend for the race win, as he, Alexander Rossi, Ryan Hunter-Reay and Fernando Alonso all led – with Hunter-Reay 28 laps, Alonso 27, Rossi 23 and Sato 17 – for a total of 95 laps.

One of the race’s primary contenders was out early, when on Lap 53, polesitter Dixon was caught in the wrong place at the wrong time at Turn 1. After fighting an ill-handling race car in his first stint, Dixon came upon Jay Howard’s slowing and crashing car in Turn 1. Dixon dove low, but unfortunately went right into Howard’s path. That launched the New Zealander airborne in a terrifying accident. While he was seen limping later in the day, Dixon had been checked, cleared and released after the biggest crash of his career.

A red flag followed for repairs to the catch-fencing, which had a hole torn in it as a result of the impact. Alonso was leading at the time of the red flag, which lasted 19 minutes.

The crash set in motion a crazy chain of events that seemed to follow the rest of the day, and saw the phrase “yellows breed yellows” influence the race.

Alonso was clearly proving his race craft in his first oval race, racing against Rossi, Sato, Hunter-Reay and others – initially Ed Carpenter and JR Hildebrand for Ed Carpenter Racing – and later the Team Penske contingent, which was trying to move forward from poor qualifying positions.

A crash that took out both Conor Daly and Jack Harvey in separate incidents also brought out the third yellow, second actual yellow following a yellow continuation after the restart. A separate debris yellow from Laps 81 to 83 meant there were four within a 30-lap window on Laps 53 to 83 after going the first 53 laps at caution-free pace of more than 219 mph.

Within this segment, Castroneves had been issued a drive-through penalty on Lap 75 for jumping a restart, which knocked him back outside the top 20. It would also set the stage for his comeback.

Indeed by the halfway mark, Castroneves had the overall lead from Hunter-Reay, Rossi, Alonso, Kanaan and Graham Rahal, withle two different strategy plays emerging – Chilton in seventh and Will Power in ninth were not running the same strategy as the leaders.

There seemed a chance at the halfway mark that these two could run the final 100 laps on just two stops and not the three expected by others. But a rash of yellows from Lap 122 onwards changed that play.

However for the second straight year it was Buddy Lazier who caused a yellow – this time a crash on Lap 128 – that would change the complexion of the race. Lazier was the only driver transported to a hospital on the day, complaining of chest pains.

One thing that hadn’t yet entered the equation was reliability, the pre-race storyline, as Honda’s engines were under the microscope.

And suddenly on Lap 137, the first blew. Hunter-Reay was the first one to go, after running second having just lost the lead to Alonso, and that took him out of the race.

On Lap 167, a second pivotal engine issue occurred – this time Kimball’s had some smoke, and it brought out the ninth caution of the race. Crucially, it put everyone on the same strategy to the end after a period when he, Chilton, Davison and Hildebrand all took turns leading, Davison having completed a 33rd-to-first run at that stage.

Chilton had pitted just before the yellow but didn’t lose a lap. As he had enough fuel to finish, he then leap-frogged back to the lead when others pitted under the caution, and he held off several advances from his competitors when racing resumed.

Alonso’s star debut came to an end on Lap 180, almost poetically, as a Honda-powered McLaren entry, with the traditionally star-crossed Andretti name at Indianapolis, slowed to a halt with smoke out of the back on the front straight. Gone too were his win chances, leaving him an unrepresentative 24th.

After this restart came another crash. This time, it saw Davison’s star run come to an end after contact with Servia, doing his typically under-the-radar drive through the field for Rahal – and second on the same strategy to Castroneves – while Power and Hinchcliffe were also caught up. Newgarden hit the wall but continued.

Sato, who’d been good but not quite delivered his standard “no attack, no chance” style, would restart second on Lap 189 before unleashing “vintage Takuma” from there.

A ballsy pass around the outside of Castroneves and Jones had moved Sato up to second and in position to attack Chilton on the final restart.

With a power advantage still to play in the Honda vs. Chevrolet battle, Castroneves’ car was no match for Sato’s, and the Japanese driver moved past Castroneves on the outside into Turn 1 on Lap 195.

The drama from there was whether Castroneves could counter. Castroneves had a run with two laps to go, but Sato defended against him on the inside.

From there his last best chance was gone, and Sato had his second career IndyCar win – albeit a slightly bigger one than his first and thus far only prior victory at Long Beach in 2013, then driving for A.J. Foyt Racing. He also started fourth in that race, as he did today.

Castroneves’ runner-up here after starting in 19th adds to past missed opportunities in 2014, losing to Hunter-Reay (who started 19th) and in 2003, losing to then-teammate Gil de Ferran. One wonders how many more opportunities he’ll have to get number four.

In finishing third, Jones actually didn’t lead a lap – he ran as high as second – and came up two spots short of emulating Rossi as a rookie winner from 11th on the grid in the No. 19 Boy Scouts of America Honda. The Indy Lights champion capped off a roller coaster month for Dale Coyne Racing with the team’s best ever Indy 500 finish, which beat Alex Lloyd’s fourth place in 2010. Jones is the first driver from the United Arab Emirates to race at Indy, although he’s a Dubai-based Brit who now lives in Miami.

Chilton led the most laps – 50 – which were the first he led all year and his first since leading just two at Iowa Speedway last year, his only prior laps led in IndyCar. The driver of the No. 8 Gallagher Honda has now delivered back-to-back career best results after also coming seventh at the INDYCAR Grand Prix on the IMS road course, although one must think this will sting after a career drive.

Kanaan was a somewhat under-the-radar fifth, leading 22 laps early but never making it back to the point in the No. 10 NTT Data Honda after Lap 27.

In sixth and never really a factor was Juan Pablo Montoya, in the fifth Penske entry, ahead of Rossi, who fell back with a similar fuel hose issue that affected him last year too. Marco Andretti was an anonymous eighth, Gabby Chaves an excellent and career-best equaling ninth in his first start of 2017 and Harding Racing’s debut, after starting 25th, while Carlos Munoz avoided the trouble for Foyt and brought that car home in 10th after starting 24th.

A heavy day of attrition meant that only 18 of the 33 starters finished. The finishers through from 11 to 17 were Carpenter, Rahal, Mikhail Aleshin, Simon Pagenaud, Sebastian Saavedra, Hildebrand, Pippa Mann and Spencer Pigot. Carpenter lost a front wing late in the day. Hildebrand fell back late after a drive-through penalty for jumping the second-to-last restart. Both Juncos Racing entries finished their debuts (Saavedra in 15th and Pigot in 18th), and Mann finished her seventh straight 500-mile race start in IndyCar, dating to 2011 (she skipped the 2012 race, bu has raced in every Indy 500 since 2013).

Unofficial results are below. 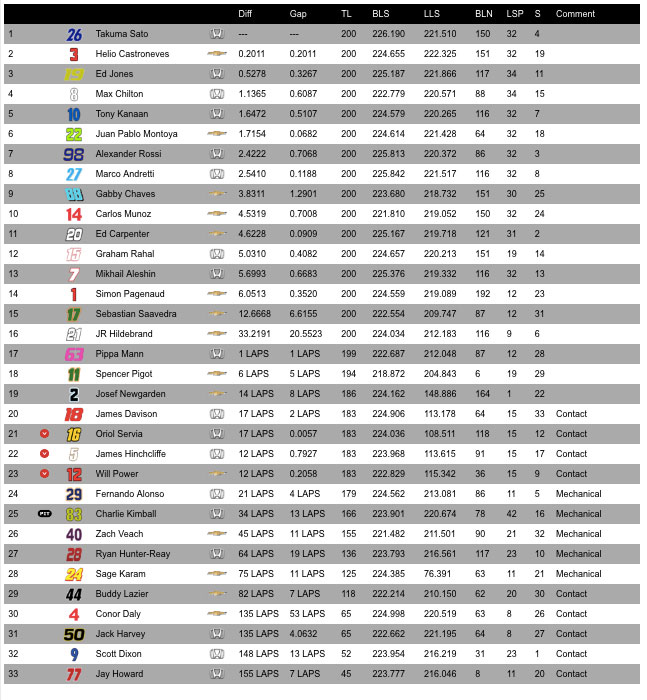 The 2023 World of Outlaws Sprint Car Series schedule features 87 races, almost identical to the last year’s number, to be contested at 36 venues across 19 states. With cancelations for mostly weather, they closed out this year’s calendar on November 5 with 69 events in the books. Carson Macedo won a series high 11 races.

In 2022, David Gravel chased Brad Sweet into the three-race finale on the Dirt Track at Charlotte Motor Speedway in one of the most hotly contested championships in Outlaws history. Sweet emerged victorious for the fourth straight year.

For the 19th consecutive season, the Outlaws Sprints will begin their season at Volusia Speedway Park for the DIRTcar Nationals from Feb. 9-11 and will return March 5-6 for another two-day show before hitting the road with a three-track swing into Pennsylvania to take on the Posse.

“Every year we continue to build the best schedule we can for drivers and fans across the country,” said World of Outlaws CEO Brian Carter is a series release. “I’m excited for the journey we’ve put together, which includes the biggest races in Sprint Car racing, our new Spring Swing through Pennsylvania, the thrill of combining the World of Outlaws and ‘Bike Week’ and so much more.”

Some tracks returning from hiatus and one brand new course include 81 Speedway in Park City, Kans. in April and again in October, Tri-City Speedway in Pontoon City, Ill. in April, Ogilvie (Minn.) Raceway in June and BAPS Motor Speedway in York Haven, Penn.

BAPS hosts its first race in more than 30 years when the track was known as Susquehanna Speedway. This midweek show will give the local Pennsylvania Posse 14 attempts to beat the traveling Outlaws.

Ogilvie Speedway is completely new to the series and makes it the 224th different venue they will have challenged.

In addition to the new spring Pennsylvania Swing, the second date at Volusia Speedway will coincide with Daytona Beach’s Bike Week and bring new eyes to the sport.

Knoxville Raceway adds another multi-night show to the calendar in April, giving this track eight sanctioned events in 2023.

And of course, there are plenty of mainstays and high dollar events, such as the Memorial Day Spectacular at Lawrenceburg (Ind.) Speedway, the 35th running of the Brad Doty Classic in July and the Labor Day Spectacular at Gray’s Harbor in Elma, Wash.

Several big paydays are on the line in 2023 including the 40th annual Kings Royal at Eldora Speedway in Rossburg, Ohio paying $175,000 to the winner, the Huset’s High Bank Nationals’ $250,000-to-win finale and the grandaddy of them all, the 62nd Knoxville Nationals with a total purse exceeding $1 million.