A wide range of Pirelli tire selections have been made for the next round of the Formula 1 season, the Canadian Grand Prix (Sunday, June 11, 2 p.m. ET, NBC).

The same three tire compounds – ultrasoft, supersoft and soft – are on offer but whereas at Monaco the ultrasoft took preference, here it’s a bit more split.

Teams have gone anywhere from seven to 10 sets of ultrasofts selected. For supersofts, it’s one to five and for softs, one to three.

The full breakdown is below. 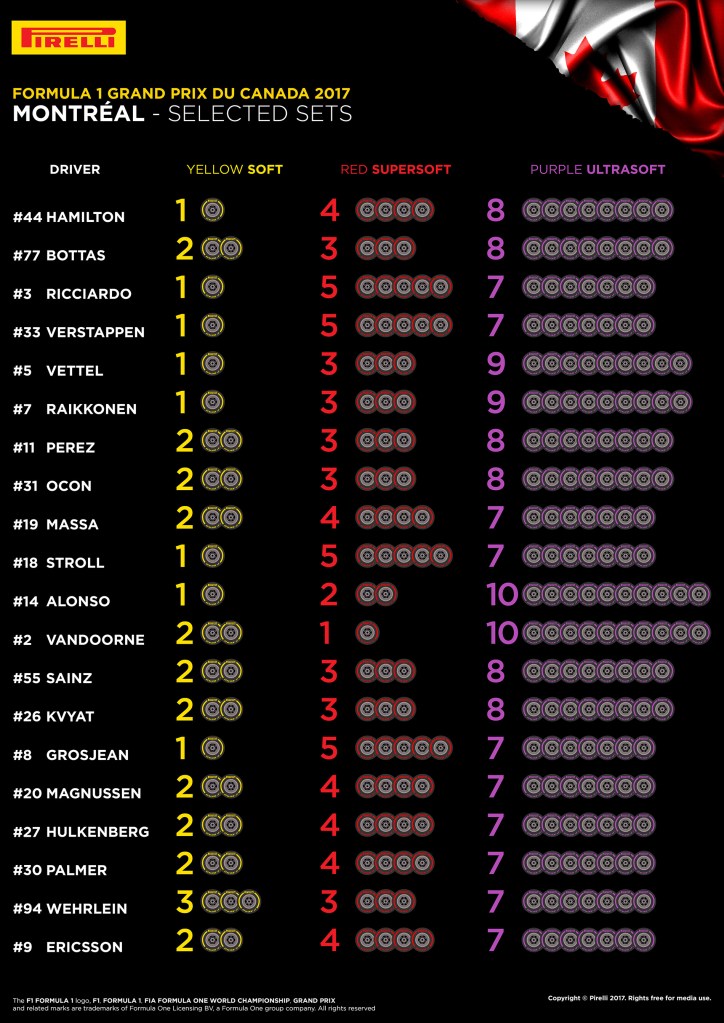 SILVERSTONE, England — Sergio Perez will be out for a second F1 race at Silverstone this week after again testing positive for the coronavirus.

The Mexican driver had hoped to return to Formula One after spending seven days in quarantine, but his Racing Point team said this morning he had tested positive.

“He is physically well and recovering,” the team said. “The whole team wishes Sergio and his family well and we look forward to his return.”

That means German veteran Nico Hulkenberg again fills in for Sunday’s 70th Anniversary Grand Prix after having also replaced Sergio Perez when he was out for the F1 British Grand Prix at the same venue last week. Hulkenberg did not start that race because of an engine problem.

There are two consecutive weekends of racing at Silverstone as Formula One tries to pack in races following the pandemic-delayed start to the season.

Perez became the first Formula One driver to test positive for coronavirus, and it had been unclear whether he would be available to drive after the period of quarantine was extended to 10 days.

Racing Point also was in the news Friday after being hit with a 15-point penalty in the Formula One constructors’ championship and fined 400,000 euros ($470,000) Friday for using brake ducts based on those from last year’s Mercedes cars.

The stewards ruled that Mercedes was the “principal designer” of the parts, and that Racing Point made only minor changes to computer design data it received from Mercedes.

Rival team Renault filed protests about the legality of the brake ducts, which were added to the “listed parts” under F1 rules for 2020. That means teams must design their own. Racing Point argued it was merely using information about the Mercedes parts to inform its own design.

Racing Point uses customer engines from Mercedes and has admitted basing its 2020 car design on photographs of last year’s Mercedes car. The similarities led to the Racing Point being nicknamed the “pink Mercedes” when it was first seen in testing ahead of the season.

Racing Point can appeal the ruling. The points deduction drops the team from fifth to sixth in the standings, below Renault. The ruling doesn’t affect the points totals for Racing Point’s drivers.

Marc Marquez will miss next MotoGP race after second arm surgery August 4, 2020 8:30 am

Lewis Hamilton wins at Silverstone despite tire puncture on final lap August 2, 2020 11:25 am