The driver of the No. 3 Hitachi Team Penske Chevrolet posted a best time of 1:15.1511 around the 2.35-mile Raceway on Belle Isle to lead the standings.

Castroneves leads the points standings after finishing second in the 101st Indianapolis 500 presented by PennGrade Motor Oil, but is looking to snap a now three-year winless drought that dates to race two here in 2014.

Graham Rahal carried over his morning pace in the afternoon in the No. 15 SoldierStrong/TurnsForTroops.com Honda for RLL Racing at 1:15.3519 with Alexander Rossi third in the No. 98 ShopAndretti.com Honda for Andretti-Herta Autosport at 1:15.4323.

Rossi had an incident at Turns 8 and 9 that ended his session early, as he lost the back end. It’ll require slight rear end repairs but he should be good to go for tomorrow’s qualifying.

Max Chilton also had a brake fire on his No. 8 Gallagher Honda for Chip Ganassi Racing but made it back out later afterwards.

Drivers ran between three and 19 laps in the session, and teams tapped into their first sets of Firestone red alternate tires.

Notes from Thursday and Friday are linked here. More on Esteban Gutierrez’s first session and IndyCar arrival is linked here. 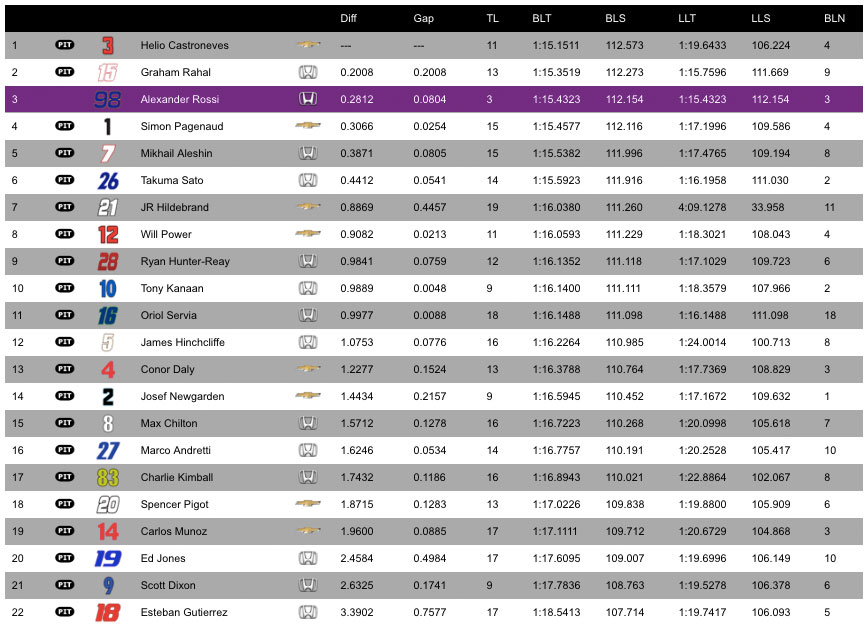