Driving the No. 15 SoldierStrong/TurnsForTroops.com Honda, Rahal posted a best time of 1:15.3328 around the 2.35-mile, 14-turn Raceway on Belle Isle street course.

It’s not been the best season results-wise for Rahal this year, with a best finish of sixth in the INDYCAR Grand Prix (coincidentally, the last time he’s been in this patriotic livery), and he enters the weekend 15th in points.

A pair of Team Penske drivers were next, Helio Castroneves and Josef Newgarden, with Alexander Rossi (Andretti-Herta Autosport) and Will Power completing the top five.

Indianapolis 500 champion Takuma Sato was 12th in the session in the No. 26 Ruoff Home Mortgage Honda for Andretti Autosport.

Of note, Scott Dixon had a rare spin in the No. 9 Camping World Honda for Chip Ganassi Racing at Turn 13, but didn’t hit anything. That brought out a red flag.

“I’m sore but it’s good to be back on track,” Dixon told IndyCar Radio’s Dave Furst, while hailing the crew for building up the car this week.

Gutierrez, the Mexican former Formula 1 driver, makes his IndyCar debut this weekend in the No. 18 Honda. 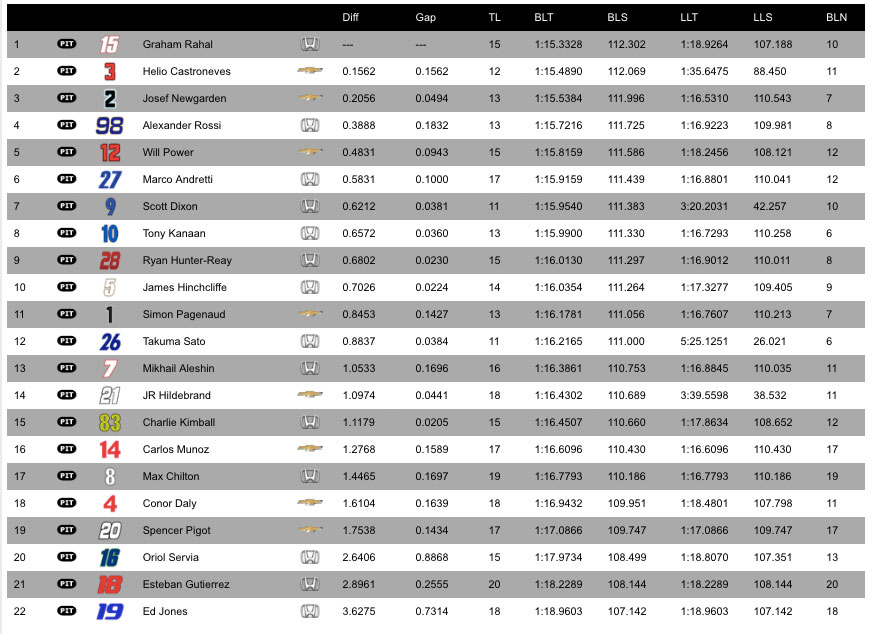