DETROIT – Graham Rahal has looked on rails all weekend at the Chevrolet Detroit Grand Prix Presented by Lear and backed it up on Saturday with his fifth and perhaps most authoritative career victory in the Verizon IndyCar Series.

The driver of the No. 15 SoldierStrong/TurnsForTroops.com Honda for Rahal Letterman Lanigan Racing led 55 of the 70 laps from pole, and never looked in doubt of being headed on-track or in the pits. His previous career high for most laps led in a race came in Texas in 2012, where he led 27 laps.

It was the combination of pace and strategy – Rahal only stopped twice and ran longer on the first stint – that helped deliver Rahal the win by a whopping 6.1474 seconds, to become the seventh winner in as many races this year.

Even more impressively, Rahal capped off a banner day for Honda with the shadows of General Motors’ headquarters in the background at the Raceway on Belle Isle Park, Roger Penske and Chevrolet’s home race.

Earlier in the day at Detroit, Acura picked up the first win for the new NSX GT3 in the IMSA WeatherTech SportsCar Championship in the GT Daytona class, with Andy Lally and Katherine Legge driving the No. 93 car.

And today, Honda swept the podium with Rahal clear of Scott Dixon, putting in an incredible drive while battling a bit of pain after his accident last week in the Indianapolis 500 to finish second, with James Hinchcliffe in third. All told, there were seven Hondas in the top 10 at the finish.

Dixon qualified sixth but rallied all day in the No. 9 Camping World Honda, only rarely dropping out of the top 10 and like Rahal, used a two-stop strategy versus a three-stopper.

Hinchcliffe spun on the opening lap of the race in the No. 5 Arrow Electronics Schmidt Peterson Motorsports Honda but didn’t lose a lap, and was able to parlay that unfortunate moment into a strategy advantage the rest of the way. He was up from 22nd to fifth by Lap 20 and stayed close to the top five for the remainder of the day.

Hinchcliffe had to hold off a late charge from Josef Newgarden, who was anywhere from three to nine tenths of a second faster per lap in the final stint of the race, but didn’t get close enough to make a move in the final few laps.

Helio Castroneves faded to seventh on a three-stop strategy. 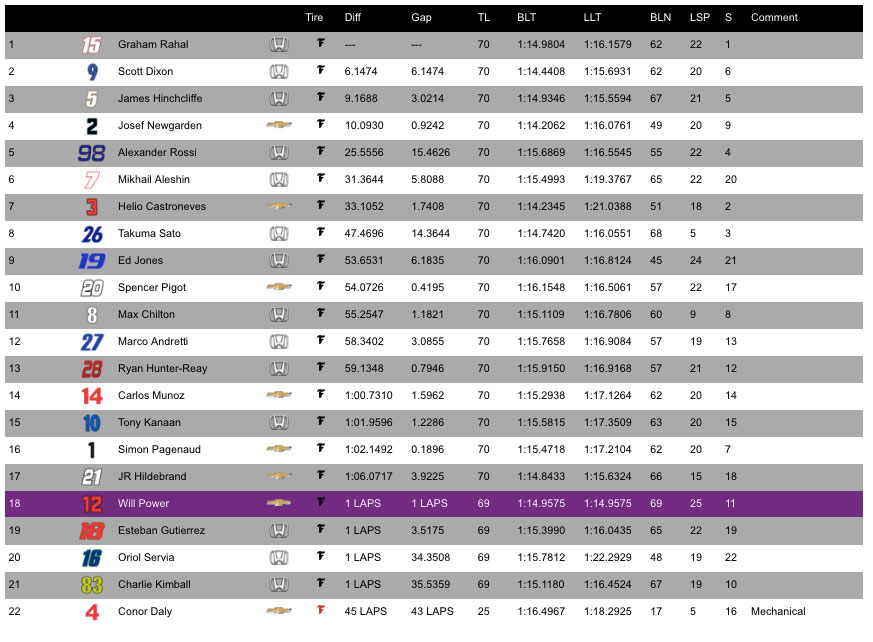