Graham Rahal will start from pole for Race 1 of the Chevrolet Detroit Grand Prix presented by Lear, Round 7 of the Verizon IndyCar Series season, after a controversial qualifying session saw Helio Castroneves lose his fastest lap for failing to slow down enough for a caution flag.

Rahal and Castroneves were in separate groups (Rahal in Group 1, Castroneves in Group 2), with Rahal just barely nipping Takuma Sato to go fastest in Group 1. Rahal set a track record in the process, turning a quick lap of 1:13.9681.

Castroneves, meanwhile, was able to better Rahal’s time when he went out in Group 2, with the Team Penske driver also doing so on his last lap with time of 1:13.8901.

However, amidst celebrations with his No. 3 Hitachi Team Penske teammates, Castroneves was notified by INDYCAR officials that he would lose his fastest lap after failing to slow for a caution flag (caused by Schmidt Peterson Motorsports’ Mikhail Aleshin, who received a penalty for causing that).

Castroneves second lap was still quickest of his group and puts him on the outside of the front row.

Qualifying was conducted differently from its normal fashion on road and street circuits. The field of 22 cars was split into two groups of 11, with combined times from each group setting the grid. 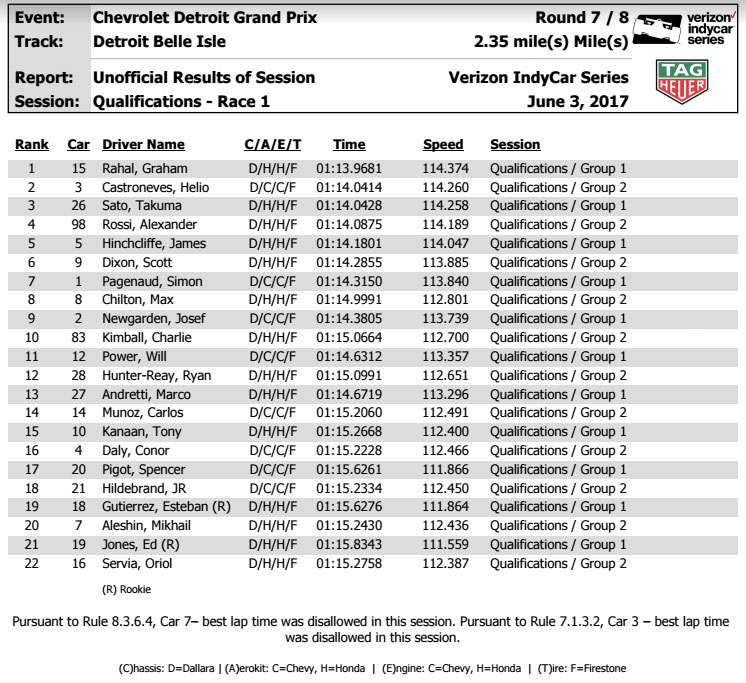