DETROIT – Graham Rahal called his shot at the start of the weekend, saying he could dominate if he got the pole ahead of this weekend’s Chevrolet Detroit Grand Prix Presented by Lear.

He did just that in race one. And he did it again in race two.

The American became the first to wave the flag as a U.S. winner at the Raceway on Belle Isle Park since 1996 (Michael Andretti) on Saturday, becoming the seventh winner in as many races in the 2017 Verizon IndyCar Series season.

And on Sunday, he became the first driver to double up in 2017, and also became the first driver to win both races of the Detroit doubleheader since the format was introduced in 2013, surviving a late red flag for a pair of mechanicals to do it. Scott Dixon swept Toronto in 2013, the only other doubleheader sweep race winner in the format’s history.

The No. 15 SoldierStrong/TurnsForTroops.com Honda won today’s race by 1.1772 seconds after leading 41 of 70 laps in this race, once again almost completing a perfect weekend. All he missed today was a point for being the fastest qualifier in his group.

Rahal got into the net lead after the first round of pit stops, because he was on a two-stop strategy while others were on a three-stopper. Rahal was second on the road to Josef Newgarden but net first after getting ahead of Takuma Sato by Lap 25. Once Newgarden pitted on Lap 29, that moved Rahal to the lead on Lap 30, and that was where he’d stay the rest of the race except during the pit stop cycles themselves.

On a three-stop strategy, Newgarden pushed early to get up to fifth place in the No. 2 hum by Verizon Team Penske Chevrolet, and then leap-frogged past polesitter Sato, Will Power and Simon Pagenaud on his final stop to get up to second on track.

It marks Newgarden’s first podium in Detroit and caps off a weekend where he was the top finishing Chevrolet, and top finishing Team Penske driver, in both the manufacturer and team owner Roger Penske’s home race.

Power took third place in the No. 12 Verizon Team Penske Chevrolet after getting ahead of Sato on the last stop with a quicker final exit.

Sato fell to fourth in the No. 26 Ruoff Home Mortgage Honda for Andretti Autosport after scoring his first pole position in three years in the morning.

There was not a caution that interrupted the race, which looked set to be the second time in the last three road or street races this has happened (INDYCAR Grand Prix at IMS road course), until Lap 66 when James Hinchcliffe stopped on track exiting Turn 2.

It got worse when Spencer Pigot’s Chevrolet engine blew up in spectacular fashion also exiting Turn 2, and that brought out a red flag to clean up the track. That lasted 18 minutes.

While contact was expected, it didn’t come on the restart – and Rahal held on over Newgarden and Power in what was an anticlimactic finish.

There was some contact earlier throughout the race – notably involving front-row starter Ryan Hunter-Reay and Helio Castroneves where Castroneves had a left rear flat and Hunter-Reay required a front wing change – and also when rookie Ed Jones and JR Hildebrand collided.

Jones hadn’t looked a rookie all season but that contact coupled with a stall on exit left him in a season-worst 22nd and last place after starting only 17th. 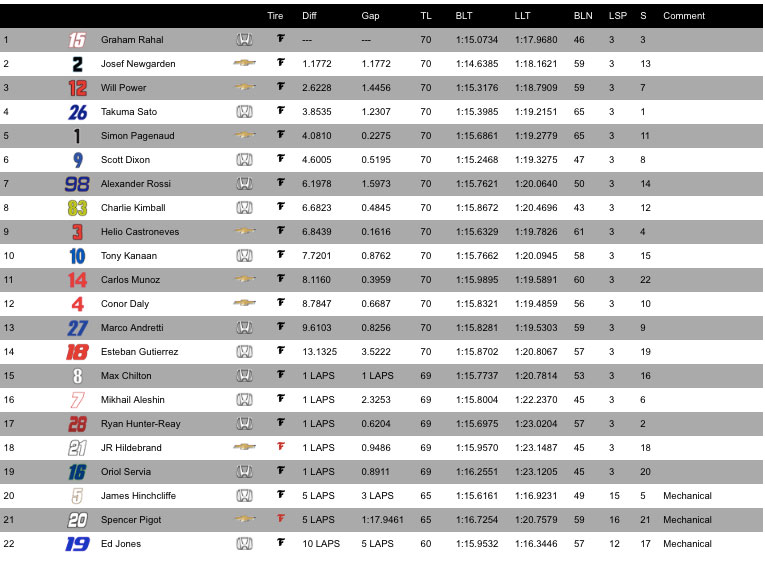