DETROIT – Takuma Sato has snatched the pole for the second race of the Chevrolet Detroit Grand Prix Presented by Lear right near the end of the second session with a new track record lap of 1:13.6732.

What looked like a near unassailable time of 1:13.9449 from Will Power – on Firestone’s black primary tires – was first for most of the second group of qualifying by more than 1.3 seconds.

Then a pair of Hondas slapped on some Firestone red alternates and found buckets of time and dropped Power down the order.

First Saturday winner Graham Rahal and then Sato supplanted him.

The second group was significantly quicker than the first group because of an accident for Carlos Munoz in the first group at Turn 2. That negated a lot of potential track time for drivers to improve and as such, left group one leader Ryan Hunter-Reay more than 1.5 seconds in arrears of Sato’s time, even though he led his session.

Both Sato and Hunter-Reay receive a point for leading their sessions.

Here’s the times, below. 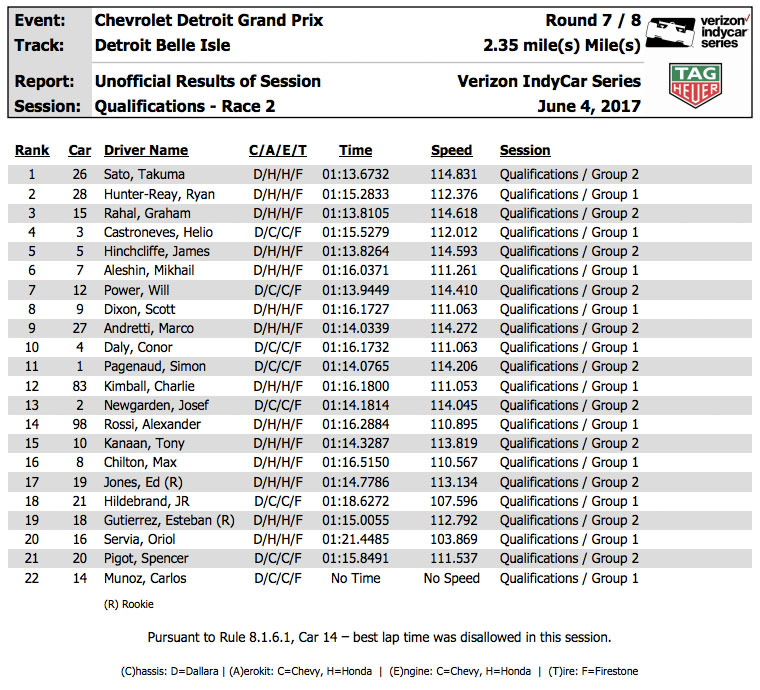