As the Verizon IndyCar Series heads into its third consecutive race weekend where “TBA” is present on Dale Coyne Racing’s No. 18 Honda, with the team set to field quite possibly its fourth different driver in as many weekends, one name you won’t see filling the entry blank is Tristan Vautier.

Vautier’s name came up a bit during the month of May because he seemed a natural fit as the injury replacement for Sebastien Bourdais, his French countryman, after Bourdais’ crash in qualifying that caused pelvic fractures and a hip injury, leaving him sidelined for the next few months.

As he was on site in Indianapolis for most of the month, it seemed either Vautier or James Davison would get the call to drive in the Indianapolis 500, thus resuming the two drivers’ quirky 2015 when both were part of Coyne’s lineup under abnormal circumstances. Davison got the call instead and drove from last on the grid up to the lead before crashing out.

Instead, the 27-year-old Frenchman who lived in Florida and Las Vegas before is now in Mooresville, N.C., not far from Charlotte, fully immersed in his new role as lead driver and coach with SunEnergy1 Racing, one of the newest teams on the block in the IMSA WeatherTech SportsCar Championship, in the team’s No. 75 Mercedes-AMG GT3.

Vautier’s career wilderness the last three years after his lone full IndyCar season in 2013 now sees him back in a full-time ride for the first time since, this year. In-between it’s been an odyssey of occasional drives with Mazda, in IndyCar with Coyne in 2015, and most recently in sports cars with Mercedes-AMG.

A chance opportunity arose at the 2016 Rolex 24 at Daytona with Kenny Habul’s SunEnergy1 Racing program as two big names who were meant to race with him fell through.

“(Kenny) rented a car (an Audi R8 LMS) from Stevenson for the 24 Hours of Daytona,” Vautier told NBC Sports. “I didn’t have a ride for Daytona, and I was going to the Roar and he was meant to drive with Will Power and Denny Hamlin, but they both couldn’t make it, so they tested me at the Roar. It worked out well, so I did the 2016 Daytona with him.

“Then he decided to buy a Mercedes, and I have been racing it all year in Europe.” 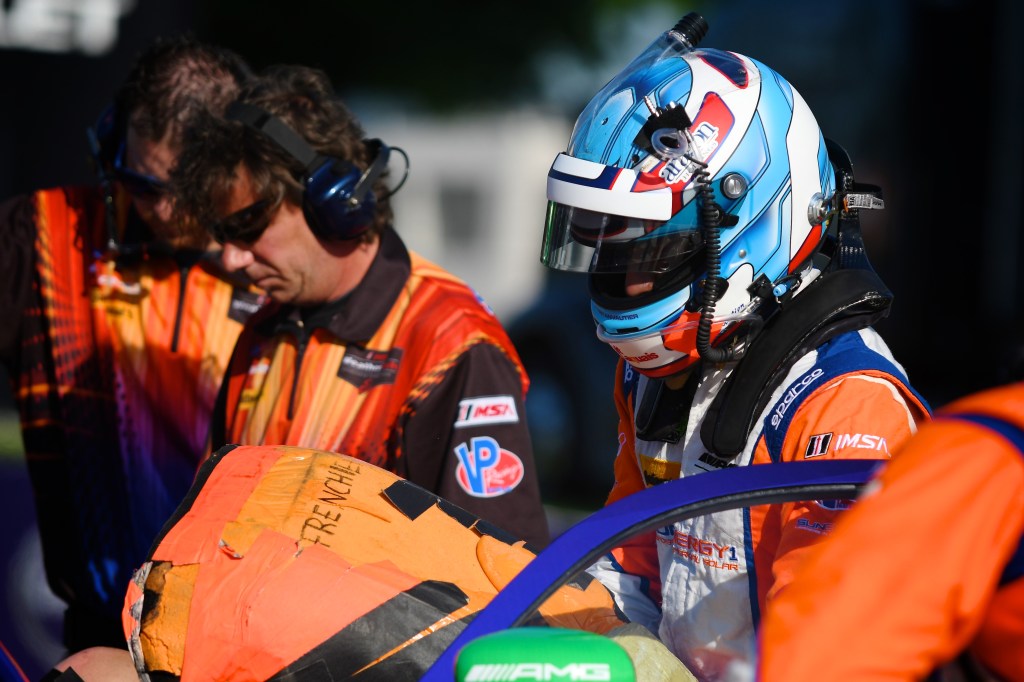 Vautier’s first full season with the new Mercedes-AMG GT3 came in Europe last year with Jerome Policand’s Team AKKA-ASP squad, which has fielded a number of drivers with an open-wheel pedigree such as Felix Rosenqvist, Daniel Juncadella, Felix Serralles and Raffaele Marciello.

In 2016, Vautier raced with AKKA-ASP and Mercedes in the Blancpain GT Series Sprint Cup, and scored his first win with Rosenqvist in the season finale at Circuit de Barcelona-Catalunya. The other highlight of his season came at the TOTAL Spa 24 Hours, where he finished second overall with Rosenqvist and Renger van der Zande.

Although the schedule was only a handful of weekends, it kept Vautier busy and plugged into the Mercedes-AMG platform.

The opportunity for Vautier’s drive with Habul to arise this year grew over the course of 2016 as Habul acquired one of the new chassis, set to premiere in America this year. Differences such as the tires – Pirelli in Blancpain vs. Continental in IMSA – require a bit of getting used to, but that’s been part of the learning process.

The harder part has been building the team from the ground up, as a first-year team in IMSA up against several heavyweights with years of experience.

“Kenny ordered the car in mid-October, he called me mid-October as well. I moved to North Carolina, to Mooresville, the start of November,” Vautier said. “At first, we had just the car and Kenny has some equipment from his NASCAR stuff, but yeah we had the car, we had a mechanic from Germany that had worked on Mercedes setting everything up, and we had a small structure.

“The first test at Daytona we were just an EZ-up and just a few things. Very quickly, the team went through a quick building process finding people. It was not easy to find great people straight away, obviously, when you’re a new team.

“But, at the same time, there were also IMSA teams who didn’t have programs together yet and so some guys were let down, so it allowed us to get a few guys that worked for IMSA teams so that really helped us have good people.

“It was very interesting for me because all winter I was at the shop, helping anywhere I can as well, outside of the car. I thought it was quite interesting to be involved from ground zero, at the start of a race team. Kenny is new to IMSA but we have quite a few people that have experience in the championship so that has helped us get up to speed.”

It’s been an interesting start to the season the first five races. Vautier set a track record in Sebring with a sub-2-minute lap, an impressive 1:59.738 lap which was 0.7 up on second place. He, Habul and Boris Said banked their first podium there. A penalty negated potential success in Long Beach, while COTA produced a comeback drive from outside the top-10 following a fueling issue on a pit stop to the second podium there (video below).

Detroit this past weekend was tougher with the wheels collapsing pre-race in a bizarre moment, and then reported brake failure sending Habul into a luckless and innocent bystander, van der Zande’s No. 90 VISIT FLORIDA Racing Riley Mk. 30 Gibson. On Tuesday morning, Habul was placed on three races probation from IMSA for unjustifiable risk (Rule 30.6).

“In some ways, it’s been surprising. If somebody had offered us in January that after four races we would have two podiums, we would have taken the deal!” Vautier laughed.

“At the same time, our speed has been so strong since the start of the year that it’s been a disappointment, especially in Austin, just because we had an issue with fueling in that last pit stop and we lost 10 seconds, if not, we really think we would have won the race.

“So that feels bittersweet because at one point we were in the pits fixing the car because a prototype had hit us at the start of the race, so we didn’t think we had the podium, and then we finish on the podium.” 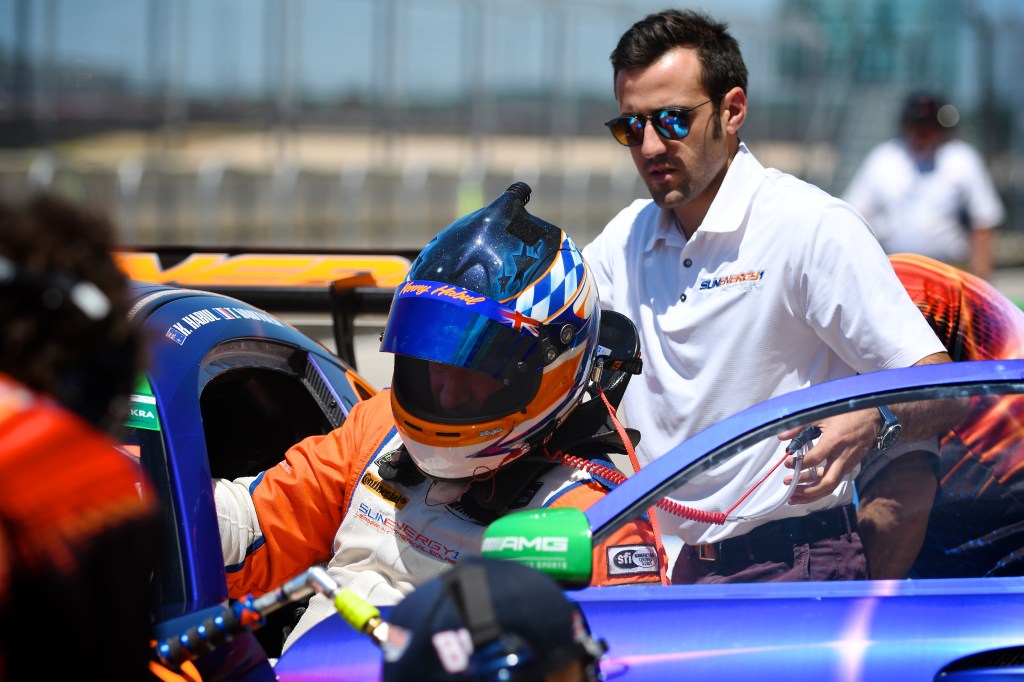 Habul, who’s grown the SunEnergy1 solar business, has gotten back into racing himself in recent years. Growing up in Australia, he raced in Formula Ford and Formula 3, and is a veteran of the Gold Coast circuit at Surfers’ Paradise. His recent starts outside of sports cars have come in the NASCAR Xfinity Series road course races.

“Every day I’m at the shop, I’m actually immersed in the solar business,” Vautier said. “It’s pretty interesting, the whole industry and Kenny’s business, but what’s more interesting is how quickly he’s been able to succeed in the business and make his company grow and how busy he is. He’s just hustling all the time. He’s like a warrior.

“He has some habits from NASCAR road courses that are quite different from the driving styles in these cars, which actually have hurt him at first, but the good thing is as soon as you tell him to do something, first off he listens, but he manages to apply it. He picks it up very easily, so that’s why I think he’s improved so quickly.” 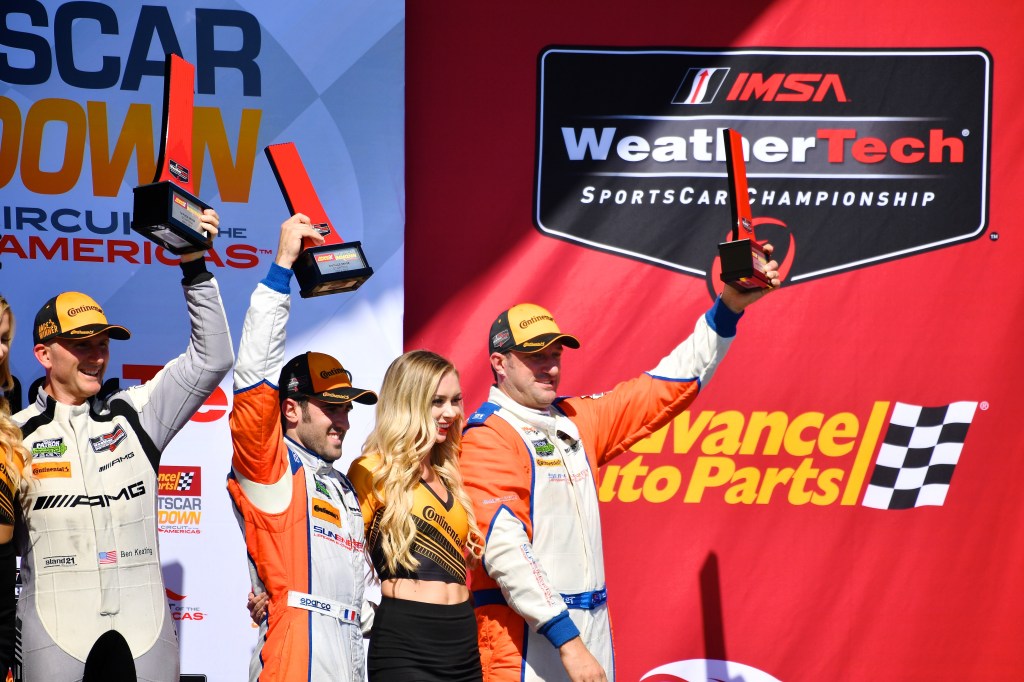 Vautier misses the open-wheel world a bit but has no major regrets about moving into the sports car world.

“I don’t really have regrets. Obviously in racing you can always think back to what you should have done differently in a race. But in terms of my career itself, I pushed like hell, I did everything I could to stay in IndyCar, to get more opportunities,” he said. “So, I cannot look back and say I didn’t give it 100%, I always did.

“So no, it’s very easy to move on and to be honest with you, I just enjoy sports cars a lot. You miss driving the IndyCar because the cars are just so fast, so fun to drive, but I’m lucky because in this series, both in IMSA and in Blancpain, you get 55 cars in the same class. At Monza there were 30 cars within one second in qualifying!

“What I was scared to miss was the competitiveness, you know, like that pressure you get. But actually I still have that in sports cars because you still have drivers that would or could be in IndyCar.

“In Blancpain, all the drivers fighting at the front are guys that could have, or were close to making it to F1 or top open wheel and just didn’t make it. They’re probably as good as the guys that made it. If you look at the whole field, it’s a lot of drivers like that, like me.”

Vautier continues with AKKA-ASP this year with Serralles and Juncadella in the Blancpain GT Series Endurance Cup. They’ve raced at Monza and Silverstone this year with Paul Ricard (June 23-24), Spa (July 27-30) and Barcelona (Sept. 30-Oct. 1) still to come.

The IMSA GTD schedule has five rounds down and seven more to go, and no conflicts for Vautier in either series.

If he returns to IndyCar he’d welcome it, but for once, he actually knows what he’s doing beyond week-to-week, which has been a good thing.

“After my rookie season in IndyCar, it’s true, I’ve always had something, but it’s been very last minute and very up and down, very part time. Last year was good. I had a decent program in Europe, even if there was not many races,” he said.

“I have to say, being the 25th of December, like having my Christmas lunch or my Christmas Eve dinner and knowing exactly what I was going to do felt really like a luxury because I have not had that since 2013 I think! Even in ’13 I didn’t have my IndyCar deal yet at Christmas, so 2012 was the last time where, at Christmas, I knew my program exactly. So, that felt really nice.

“It was nice, also, to have testing since it’s the same since 2012, since my Indy Lights season where I had everything signed early, I always jump in the cars in February or March and this time we’ve had testing in November and December. Obviously we’ve had so much to take in as a new team, so I couldn’t say we showed up to the first race completely prepared, but it still felt really nice to be able to be in the groove already when we showed up at Daytona.

“If I get the chance to go back I would like it, and it’s good because both my teams in Europe and here, with Kenny, are supportive of me and would like to see me succeed if I could maybe to back. But, to be honest, I’m here and I’m giving 100% and in the moment I don’t think about IndyCar too much, I just think about winning races and doing the best job I can here for Kenny.” 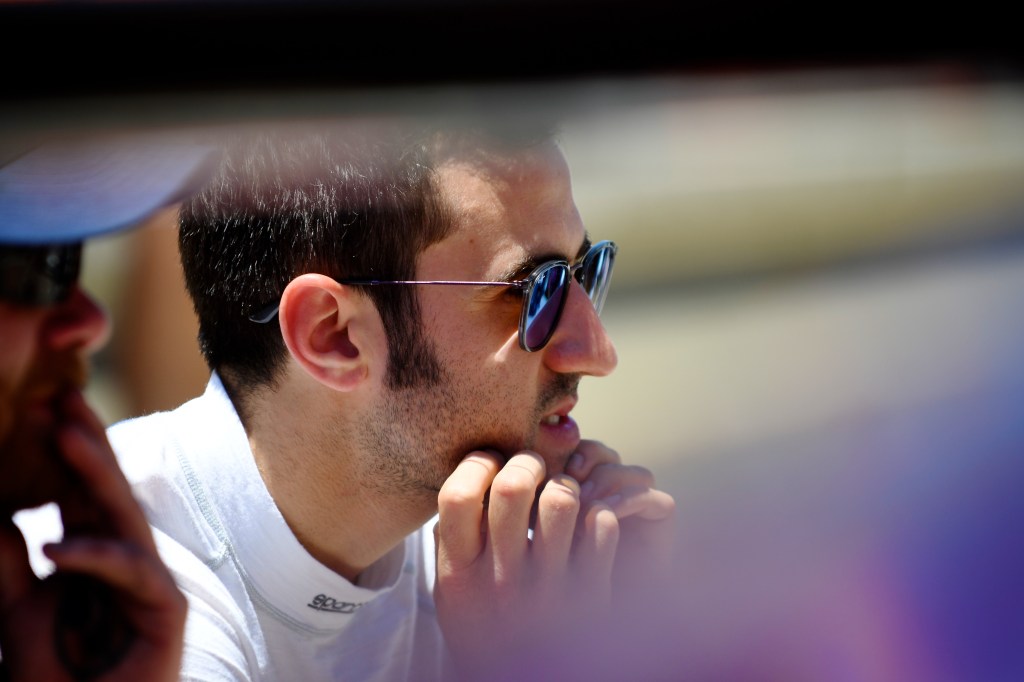