For Kimball, it his his first pole in 109 career IndyCar starts, his previous best being second at the 2016 INDYCAR Grand Prix at the Indianapolis Motor Speedway road course. It is also the 89th pole for Chip Ganassi Racing.

“I’m really excited to be on pole. The guys totally deserve it,” said an ecstatic Kimball. “Everyone at Chip Ganassi Racing has been working so hard and the boys have had my back all year long through the good, the bad, and the ugly. It’s so nice to be able to repay them with a pole position here at Texas Motor Speedway. The No. 83 Tresiba Honda was really good right out of the box and (engineer Todd (Malloy) made a few adjustments that made it better during the course of practice. During qualifying we just took a swing at it and went out and got the job done.”

Alexander Rossi qualified third for Andretti Autosport while Tristan Vautier qualified an impressive fifth on his return with Dale Coyne Racing. This matches Rossi’s best career start (Indianapolis 500) while Vautier has a career-best on ovals (was 10th in 2013) but not overall (third at Barber in 2013).

The top eight qualifying speeds all came from Honda powered cars. Will Power (ninth, for Verizon Team Penske) was the best of Chevrolet runners.

Of note: qualifying speeds were up significantly from 2016 on the newly repaved and reconfigured Texas Motor Speedway. Kimball’s pole speed of 222.556 mph came in at over five miles per hour faster than Carlos Munoz’s 2016 pole speed of 217.137 mph. In total, 18 cars turned an average speed that was faster than last year’s pole mark.

Times are below. Per NBCSN’s qualifying coverage, Carlos Munoz did not make a qualifying attempt after failing to make it through technical inspection in time. Final practice for the Rainguard Water Sealers 600 will roll off tonight at 6:45 p.m. ET. 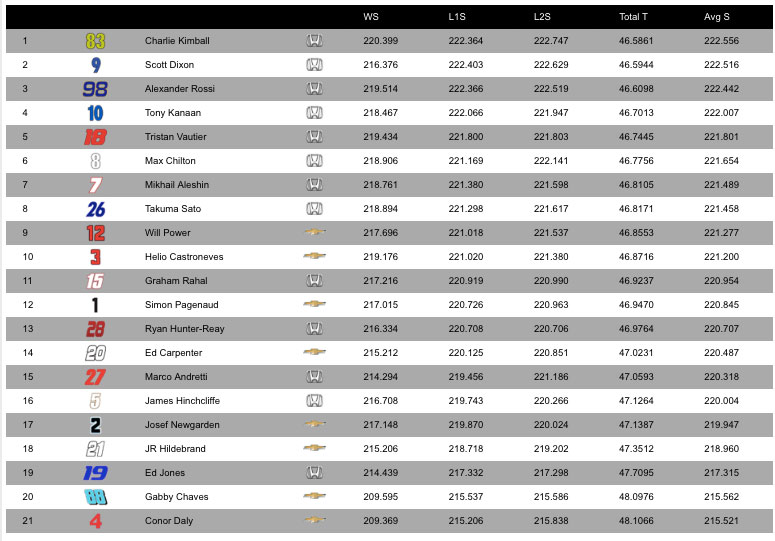