Red Bull Global Rallycross heads north of the border for its first Canadian race in its history this weekend. The trip to Ottawa’s Canada Aviation and Space Museum is part of the Ottawa 2017 calendar, a year-long celebration of Canada’s 150th anniversary of Confederation.

It’s an important event for Red Bull GRC as it makes its debut in Canada, to showcase the talent and potential of the Supercars and GRC Lites fields.

Asked earlier this year what his favorite event to look forward to in his Supercars debut season, GRC Lites champion Cabot Bigham of Bryan Herta Rallysport said Canada is it.

“For Canada, it’ll be my first time ever leaving the country to race… I guess except (Las) Vegas for an international conference!” Bigham laughed, speaking to NBC Sports pre-season. “But going to Canada will be really cool in general for us and for GRC.”

Bigham isn’t a winner yet this year but there’s been no shortage of variety at the top of the GRC charts, as four drivers from three teams and three manufacturers have won so far this season.

Just 20 points separate Speed (288 points), Foust (269) and Arpin (268) heading to the second doubleheader weekend of the year, and the weekend that brings Red Bull GRC’s 2017 campaign to its halfway point.

Honda’s trio of Mitchell DeJong (244), Sebastian Eriksson (215) and Oliver Eriksson (203) are also within striking range. DeJong scored his first Supercars podium at Thompson race one while Oliver Eriksson has a best finish of fourth in the finals.

Bigham has a best finish of sixth and sits seventh in points. Subaru Rally Team USA finally got a double top-five at Thompson race two, with Chris Atkinson on the podium in third and Patrik Sandell in fifth. 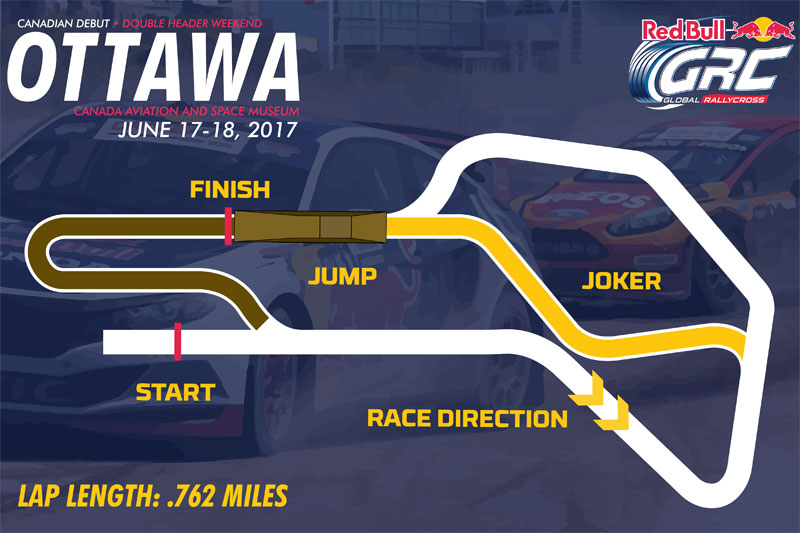