Team Penske’s Josef Newgarden topped second practice in a 1-2-3-4 sweep for the Team Penske outfit, driving the No. 2 DeVilbiss Team Penske Chevrolet. Newgarden’s best lap of a 1:42.8229 was about five hundredths of a second quicker than teammate and defending race winner Will Power, who was second with a 1:42.8229. Simon Pagenaud and Helio Castroneves completed the Penske top four sweep, with Schmidt Peterson Motorsports’ James Hinchcliffe the best of the Honda drivers in fifth.

The session was only briefly interrupted early on when Alexander Rossi went off the track in Turn 14 and gently slid into the tire barrier. The red flag was flown to remove the No. 98 NAPA Auto Parts/Curb Honda from the barrier, but Rossi was able to continue, ending the session in 11th after leading the morning practice.

Of note, Dale Coyne Racing’s Ed Jones enjoyed a strong session to end up sixth, while teammate Esteban Gutierrez was 17th on his return to Coyne.

Also, Robert Wickens continued to fill in for Mikhail Aleshin, ending Practice 2 in 20th. While Aleshin is reportedly en route to Road America, it is unknown if Wickens will continue his fill in role through the weekend. 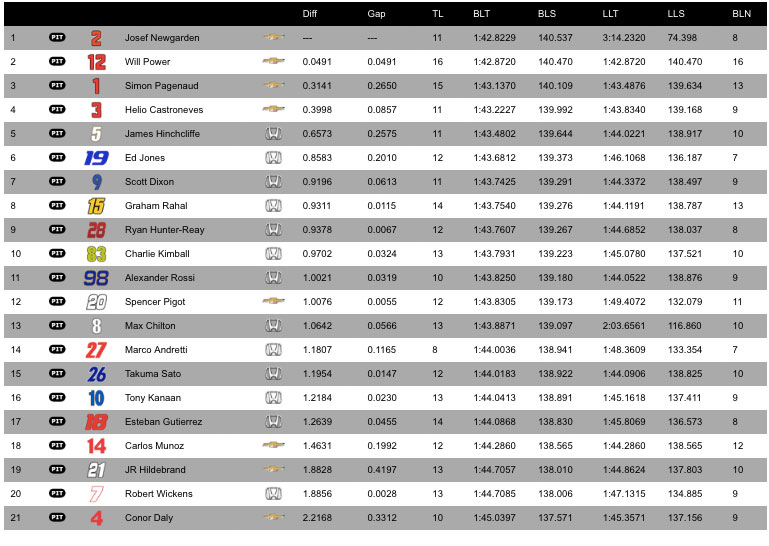