The young American has always liked this track, as this was one of the tracks he had past experience on prior to his debut season in IndyCar.

At the 4.014-mile circuit, Rossi posted a best time of 1:43.3285, clear of three Team Penske Chevrolets of Simon Pagenaud, Will Power and Josef Newgarden. Scott Dixon completed the top five.

“It’s early; it’s a good way to start,” Rossi told IndyCar Radio after the session. “We’ve known we had a fast car. We just haven’t executed. We want our first win under our belt.”

Only the top 10 drivers down to Helio Castroneves in 10th were within one second, at 0.9964 of a second.

Eighth-placed Ryan Hunter-Reay brought out an early end to the session with an off-course excursion, beached at Turn 14. He was OK but the session ended a minute or two early.

Robert Wickens, in his first official Verizon IndyCar Series session filling in for Mikhail Aleshin at Schmidt Peterson Motorsports, was 20th at 1:45.6823. That was within a tenth of the returning Esteban Gutierrez at 1:45.6257, for Dale Coyne Racing.

Wickens’ teammate James Hinchcliffe was sixth in this session. Meanwhile Gutierrez’s teammate Ed Jones debuted a new Walter Payton tribute helmet; Payton was Dale Coyne’s former business partner and had his first IndyCar race as co-owner here. The late Chicago Bears running back was, of course, one of the best running backs in NFL history. Jones’ decision to wear a Bears helmet in Elkhart Lake, not far from Green Bay, is a brave one!

“Supposedly, he’s on a flight. He got his visa from Paris. He’s supposed to land in Chicago tonight. We’ll see,” he said.

“Yeah up until yesterday morning we thought Mikhail would come in yesterday, and cruise normal fashion. Then his passport didn’t show up. We didn’t know if a day, two or three days. Called half a dozen guys. It was a bit of a scramble. We already had Robert’s seat, so that was convenient. Who could get here the quickest and get in the car. He hasn’t driven here in 10 years. But he’s getting up to speed quickly.” 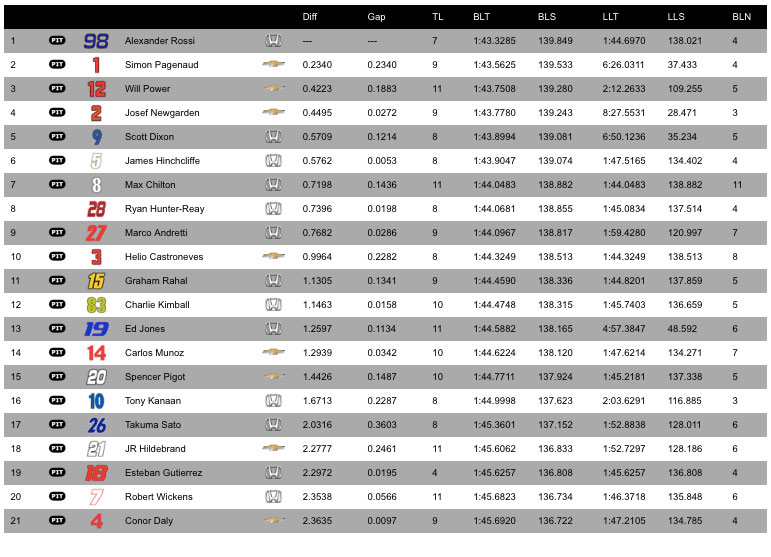