ELKHART LAKE, Wis. – After a year of near misses and frustration, Scott Dixon has finally captured his first win of the Verizon IndyCar Series season.

The driver of the No. 9 NTT Data Honda for Chip Ganassi Racing has won today’s KOHLER Grand Prix at Road America after leading 24 of 55 laps, and holding off a late charge from Josef Newgarden, best of Team Penske’s quartet.

The win also provides Mike Hull a victory on his 25-year anniversary with the team, a special moment for the entire organization. Dixon is now the eighth winner of the year, and the victory comes at the only active track where Dixon hadn’t led a lap – until today. It’s his 41st win of his career and extends the number of years he’s won a race to 13 straight years, dating back to 2005.

Hull made an excellent strategic decision to go with Firestone’s red alternate tires on the second-to-last stint. Following a restart after Takuma Sato spun at the Kink, Dixon then made a spectacular move to Newgarden’s outside going into Turn 1, and completing the move on exit. Newgarden had no counter as he was on Firestone’s blacks at that point.

Newgarden led home teammates Helio Castroneves, who fell to third from the pole, Simon Pagenaud and Will Power, as Penske ended second, third, fourth and fifth after sweeping the top four spots on the grid.

Tony Kanaan had a heavy accident at the Kink but got out of his car, in the race’s one major incident. 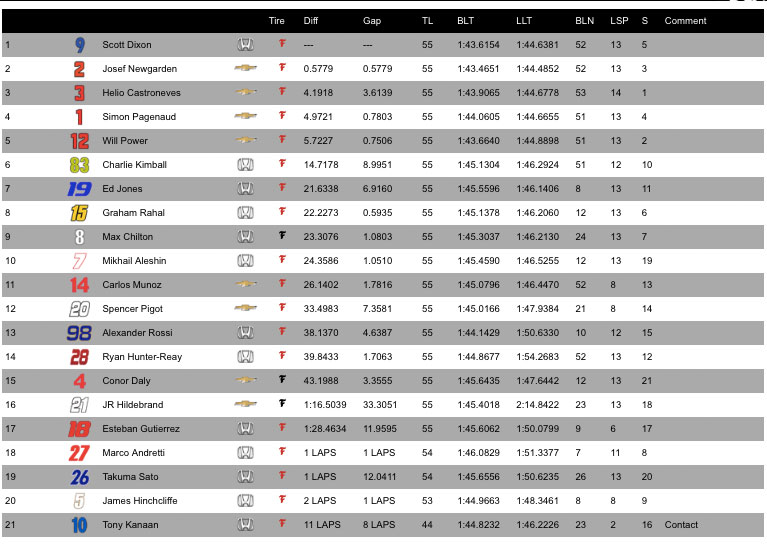