Starting today, Pritchett will also become the first female athlete ever featured in a series of TV commercials and promotions for Papa John’s Pizza. The company was a part-time sponsor for Pritchett last season and elevated to primary sponsor for 2017. 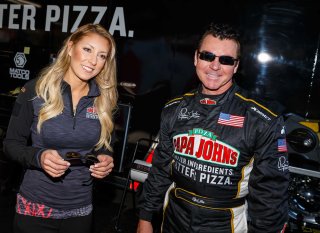 Pritchett and her 11,000 horsepower dragster have certainly delivered for Papa John’s, being on top or near the top of the NHRA Top Fuel standings all season.

Pritchett’s TV spots will feature a limited time offer of “Papa John’s Double XL” pizza, which will be available nationally from today through July 23.

“It is an honor to be able to represent this sport and Papa John’s on a national scale and to be featured as the first NHRA driver on a national pizza box,” Pritchett said in a media release.

Pritchett and Papa John’s founder, chairman and CEO, John Schnatter (pictured above with Pritchett), have also teamed up for the Charity Challenge Series, which has already raised $40,000 thus far this season.

The Challenge – which features Pritchett racing her Dodge Challenger vs. Schnatter driving his classic 1971 Chevrolet Camaro Z28 – promotes awareness and resources to combat the mental and physical issues that returning military heroes and their families may face. The next Challenge will be July 7-9 at Route 66 Raceway in Joliet, Illinois.