Red Bull Global Rallycross heads to Lucas Oil Raceway just outside Indianapolis in Clermont, Ind. this weekend for a return to some normalcy – a single-race weekend in a market pretty close to some of its teams.

This comes after a tough stretch of back-to-back doubleheader races in Thompson, Conn. and Ottawa, Ontario in June. That quartet of races brought the 12-race season to its halfway point.

A midseason report is pretty simple to encapsulate in the marquee Supercars class: Variety has ruled the roost through the first six races.

Tanner Foust and Scott Speed have won three of the first six races, Foust having scored his second win of the year last time out at Ottawa race two. But while the dueling Volkswagen Andretti Rallycross pair have half the wins this year, they haven’t been as thoroughly dominant as their last two years.

Steve Arpin’s been the most consistent threat, with his privateer Loenbro Ford winning twice and right in contention.

Sebastian Eriksson delivered Honda Red Bull Olsbergs MSE’s first win for the new Honda Civic Coupe at Louisville in a dramatic photo finish over Arpin, but it’s been full-season rookie Mitchell deJong who’s been OMSE’s most consistent contender. The past GRC Lites champion has six top-five finishes in as many races, including three third-places from his last four starts.

Foust leads the standings with 418 points heading to Indianapolis this weekend, while the next three behind him are all in striking distance. Arpin has 391, Speed 381 and DeJong 372. Eriksson is fifth on 330 points and risks falling out of the title hunt if he can’t gain some points this weekend.

GRC Lites has been Cyril Raymond’s land of dominance so far. The French driver has taken multiple victories for Olsbergs MSE X Forces and leads that championship on 407 points over Conner Martell (DirtFish Motorsports) on 344 and sports car veteran Colin Braun (CORE autosport) on 333. Braun will drop back in the standings as he’ll miss the GRC Lites this weekend to focus on his IMSA WeatherTech SportsCar Championship commitments at Canadian Tire Motorsport Park. 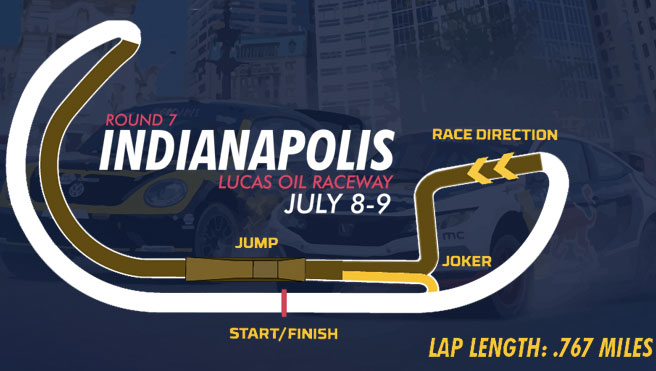 Indianapolis seems a natural venue for GRC to debut and it’s with a bit of excitement it does this weekend.

The 0.767-mile layout at Lucas Oil Raceway runs on most of the oval before cutting inside for the dirt section. The full track details are below:

Here’s some of the driver comments heading into the weekend.

“True to rallycross form, we’re bringing the racing to a whole new group of fans with the new tour stop in Indianapolis,” Foust said. “It’s a town very familiar with racing, but it will be the first time fans in Indy will see rallycross live. I always love when racing fans see rallycross for the first time, because they’re always so shocked at the excitement and speed of the cars.

“This event has a bit of a different vibe though, since it’s the home of Volkswagen Andretti Rallycross. Our teams of mechanics and engineers will have family and friends present, so I’ll get to see the kids and families we’ve heard a lot about and signed autographs for over the past few years.”

“This track will be the fastest of the year,” deJong said. “The most challenging part of the circuit may be the long arching corners, because they will demand so much focus and attention to detail from the drivers.”

Added Austin Dyne, of Rahal Letterman Lanigan Racing, “It’s pretty cool to be racing in Indy. I have never raced here before except in a charity karting race. I’ve been coming here as a little kid to watch the Indy 500 and back when F1 came here.”