Both Josef Newgarden and Ed Carpenter Racing will look to follow up Newgarden’s dominant performance at the Iowa Corn 300 (Sunday, 5 p.m. ET, NBCSN) at this year’s stop on the calendar.

For most of the first Verizon IndyCar Series practice Saturday at the 0.894-mile Iowa Speedway, it was Carpenter on top – until the final five minutes when Newgarden supplanted his old boss and old teammate.

Newgarden took his No. 2 Fitzgerald Glider Kits Team Penske Chevrolet to a best speed of 185.609 mph (17.3397 seconds) near the end of the session, leading a Team Penske top-three sweep in the session.

Carpenter took the No. 20 Fuzzy’s Vodka Chevrolet to a best speed of 184.137 mph. Carpenter makes his fourth start of the season, all on ovals, with Spencer Pigot back in his usual spectator role for the oval races.

The session was initially only meant to be 75 minutes, but was extended five minutes following Carpenter’s teammate JR Hildebrand crashing in Turn 2 in his No. 21 Fuzzy’s Vodka Chevrolet with just under 15 minutes remaining. Hildebrand got his left side wheels below the white line and spun backwards into the Turn 2 wall.

Wow. Nice observation from @IndyCarRadio crew as the steering wheel pops off Hildebrand's car. I feel like this happened at Pocono last yr? pic.twitter.com/JkW3qtIY4d

While Hildebrand got his hands off the steering wheel, it was fortunate he did so. The steering wheel popped off the car on impact and flew into the air, which also happened last year when Charlie Kimball had an accident in practice at Pocono Raceway and it popped off.

Marco Andretti was fifth and top Honda. Andretti’s most recent IndyCar win came in 2011 at Iowa Speedway, part of Andretti Autosport’s run of six consecutive victories at the track from 2010 through 2015.

Scott Dixon had a shortened session with penalties assessed following the Road America weekend, forced to sit out the final 20 minutes for three violations: entering the course after a checkered flag in the warmup, entering the pit lane from the paddock under power and failing to observe INDYCAR direction. 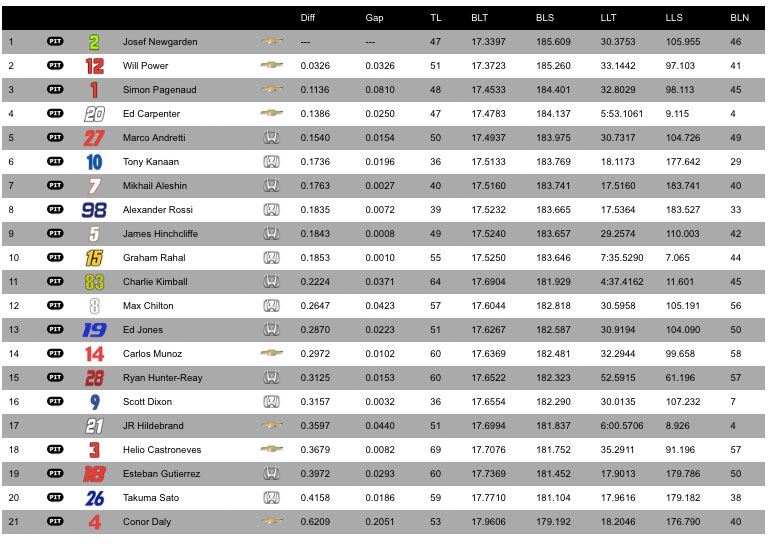