The pendulum swung back from Helio Castroneves to Will Power winning poles in the Verizon IndyCar Series 2017 season in qualifying for Sunday’s Iowa Corn 300 (5 p.m. ET, NBCSN).

Power took this pole though not from Castroneves, but JR Hildebrand, ruining a potential fairytale story where Hildebrand could have secured his first career pole on the same day he had an accident earlier in the day in practice.

Hildebrand had the top spot with a two-lap average speed of 183.811 mph, which held up for nine further cars after going out 11th, in the No. 21 Fuzzy’s Vodka Chevrolet.

But Power not only beat that speed, but obliterated it, with his two-lap average of 185.210 – a full 1.3 mph quicker than Hildebrand – as the last driver out in the No. 12 Verizon Team Penske Chevrolet.

The pole is Power’s fourth of the year and 48th of his career. Although considering neither a polesitter nor Team Penske has won in the 10 previous races at Iowa Speedway, perhaps it’s not the best place to be starting.

“It was actually a good day to be the last one out,” Power said. “The track was very slippery early. I got good feedback from my teammates.  We made a few changes to the car. Our Verizon Chevy was solid. Looking forward to the race tomorrow. Should be hectic because you are always in traffic. Should be a lot of fun.”

Hildebrand was pleased to be back out in his repaired car, which only needed a rear wing change after crashing in Turn 2 in practice. It’s a career-best start for him; his best had been third on the last short oval of the year in Phoenix, where he finished third.

“I’m not sure it was fun. It was exciting!” Hildebrand told NBCSN’s Robin Miller. “For us, it’s a lot of credit to the team. It was nice to be back out there and push pretty hard. We were close to the limit.”

Their respective teammates qualified third and fourth, with Castroneves in third and Ed Carpenter in fourth.

Indianapolis 500 champion Takuma Sato leapt from 20th in practice to be best Honda on the grid, fifth in the No. 26 Andretti Autosport Honda.

Elsewhere Marco Andretti reported something broke on his No. 27 Andretti Autosport Honda and was lucky not to crash, only posting a two-lap average of 171.710. Meanwhile Carlos Munoz, in his No. 14 ABC Supply Co. Chevrolet, had a near identical incident to Hildebrand’s in qualifying and lost it exiting Turn 2. He didn’t post a speed and will start last in the 21-car field. 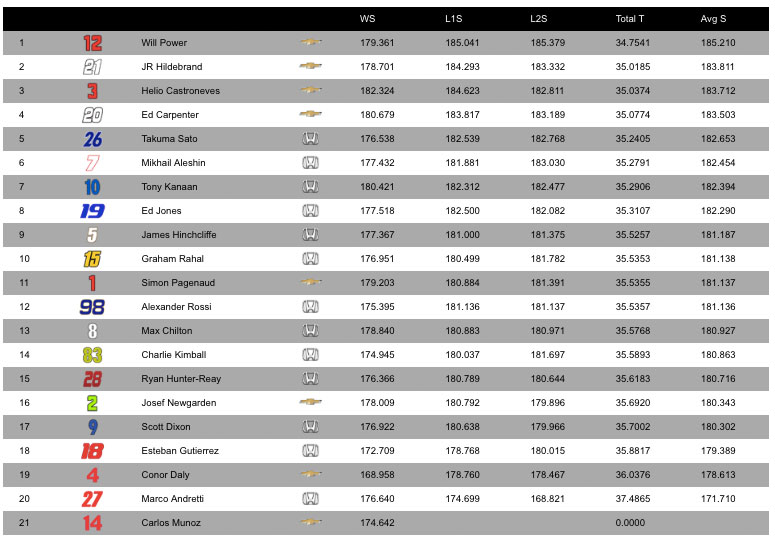