With a mix of veteran savvy, ultimate pace and better traffic management, and with his longer term future in the Verizon IndyCar Series now up for discussion, Helio Castroneves responded in the best way possible Sunday by snapping a three-plus year winless drought in the Iowa Corn 300.

The driver of the No. 3 Hitachi Team Penske Chevrolet made the ultimate pass for the lead with just under 30 laps to go as JR Hildebrand, who’d got ahead of him on the final pit stop sequence, got balked in traffic.

Castroneves got a monster run out of Turn 4 and passed the No. 21 Fuzzy’s Vodka Chevrolet to launch past on corner exit, with Hildebrand unable to hold off the surge.

Hildebrand fought back in the final 15 laps but was unable to catch up to Castroneves, who scored his first victory since Detroit race two in 2014. He led 217 laps after starting third.

The result was huge in responding to stories over the weekend this is poised to be his final full-time season in IndyCar with Team Penske’s impending but not officially announced sports car program set to debut next year.

Understandably, Castroneves was his typically ebullient self post-race, more than normal after snapping the drought.

Hildebrand at least matched a career best result and scored his second podium finish of the season.

Ryan Hunter-Reay drove brilliantly from 15th up to third for a needed podium finish in his No. 28 DHL Honda, a great result in an otherwise difficult season.

Polesitter Will Power never looked a winner, trailing Castroneves and Hildebrand most of the race, while Graham Rahal was another big mover a la Hunter-Reay, up to fifth from 10th. Rahal said post-race he was disappointed with slower traffic.

The three top-five points drivers who started outside the top-10, points leader Scott Dixon and the other two Team Penske drivers, Simon Pagenaud and Josef Newgarden, had mixed days.

Newgarden was the biggest mover and looked to have parlayed a strategic gem to move forward on the second-to-last stint after pitting on an earlier caution before a red flag for rain. But he covered the leaders in pitting not long after they did for the final stint, and ended sixth behind Rahal.

Pagenaud and Dixon fought their cars throughout the race and finished seventh and eighth, with Tony Kanaan and James Hinchcliffe completing the top-10 finishers.

A brief sprinkle caused first a yellow flag, then the red, but the race resumed after only an eight-minute, 32-second delay.

WHO HAD A GOOD RACE? Castroneves dominated while Hildebrand returned to the podium for the first time since Phoenix, and Hunter-Reay the first time since the INDYCAR Grand Prix at the Indianapolis Motor Speedway road course. … Beyond the podium finishers, Rahal banked his fourth top-five in the last five races. … In 13th, Esteban Gutierrez never looked a rookie in his maiden oval start and impressed to finish all but one lap.

WHO HAD A BAD RACE? Takuma Sato fell back from fifth on the grid to 16th in a tough day at a track where he entered with only a 17.8 average finish. Similarly, slow from the start, Marco Andretti never recovered and ended 17th, a spot ahead of rookie Ed Jones who had a rare off day after starting a career-best eighth. … AJ Foyt Racing’s pair of Carlos Munoz and Conor Daly both scrubbed the wall exiting Turn 4 and retired, making for yet another tough day. … After an early charge to fourth, Mikhail Aleshin dropped out early with a spin and crash in Turn 2. … Off-sequence strategies didn’t help either of Ganassi’s other two drivers with Max Chilton and Charlie Kimball, despite brief stints in the lead, ending 14th and 15th.

NOTABLE: The win is Castroneves’ 30th of his career. … Hildebrand matches his career-best finish of second, last set in famous – or infamous – fashion at the 2011 Indianapolis 500. … Dixon still leads the points, but only by 8 over Castroneves.

QUOTABLE: From Castroneves after his win: “I’ll tell you what. What a car! This Hitachi Chevy was unbelievable. Oh my goodness!  What a great car. What a great team. What can I say? What a race. I am speechless. I want to thank, obviously RP (Roger Penske) and those guys and my group and my teammates for working so hard together. But the Hitachi Chevy was on rails! We had a little bit of an issue in the beginning, but after we shut off the car, it was great. What a great feeling.  It’s just like the first time!” 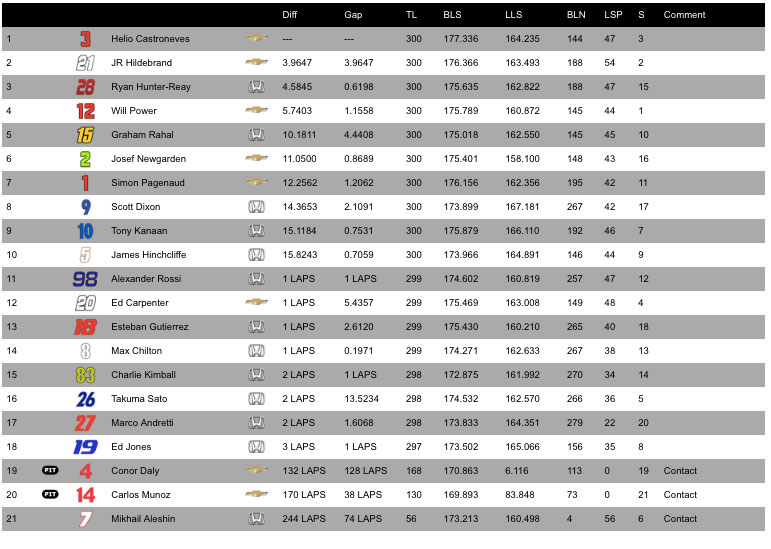