Not even a week after his win Sunday at Iowa Speedway, Helio Castroneves carried the early momentum in to lead opening practice for the Verizon IndyCar Series’ Honda Indy Toronto (Sunday, 3 p.m. ET, CNBC).

The driver of the No. 3 Hitachi Team Penske Chevrolet tackled the 1.786-mile Exhibition Place street circuit at 1:01.1211.

Scott Dixon was top Honda in fourth ahead of Graham Rahal to complete the top five.

In his first street course session in IndyCar since this race in June two years ago, Sebastian Saavedra took over the No. 7 Honda for Schmidt Peterson Motorsports and was 2.8 seconds off Castroneves, and 2.1 off teammate James Hinchcliffe in seventh. Hinchcliffe was just behind Ed Carpenter Racing’s Spencer Pigot, a solid sixth.

A couple drivers ran into the runoffs but there were no major incidents in the session. The only red flag came for debris from a banner in Turn 1 coming loose and onto the race surface.

Schmidt Peterson Motorsports team manager Taylor Kiel didn’t comment on the details of the change from Mikhail Aleshin to Saavedra this weekend and said the car’s driver status for the rest of the year is still to be determined.

Meanwhile Marco Andretti, who was sidelined in the session early with an oil pump issues, addressed Query’s question about sports car rumors for him thusly: “That’s just the journalists doing as bad of a job as I’m doing this year. I’m not going anywhere.” 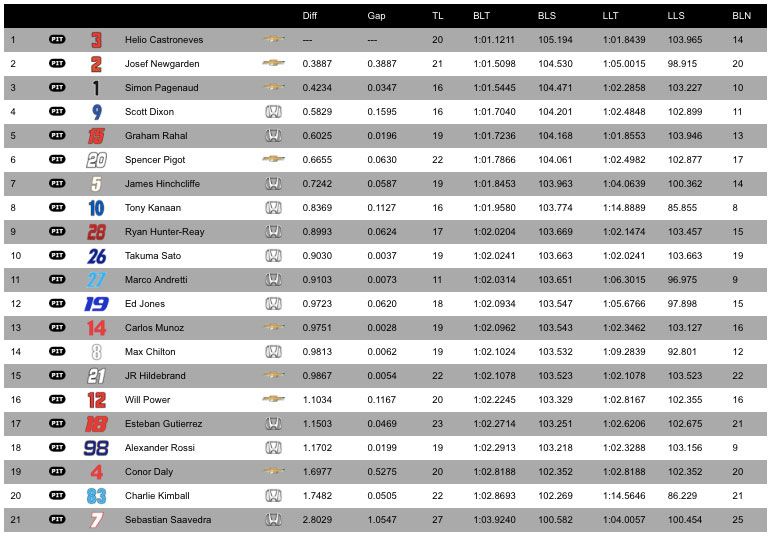