“(The) track changed quite a bit,” Pagenaud said of conditions on Saturday morning in an interview with Advance Auto Parts IndyCar Radio Network. “We’ll see how the red tires go and how we manage. We might have potential understeer. This track is so much fun! The last section is something to drive here.”

Josef Newgarden and Will Power finished third and fourth to make it an all Team Penske top four, while Andretti Autosport’s Ryan Hunter-Reay was the fastest Honda runner in fifth.

The session saw a quick red flag when Hunter-Reay’s  teammate Takuma Sato went into the runoff in Turn 3. He didn’t suffer any wall contact, but his car did stall and needed to be refired, necessitating the brief stoppage. Will Power also had a quick off of his own, this one in Turn 8 early in the session, but he quickly rejoined the fray.

Elsewhere, Ed Carpenter Racing’s JR Hildebrand saw his session come to an early end after slight wall contact in Turn 10 damaged the front suspension. He returned to the pits under his own power, but the damage was too severe to go back out. However, he should be ready for qualifying this afternoon. 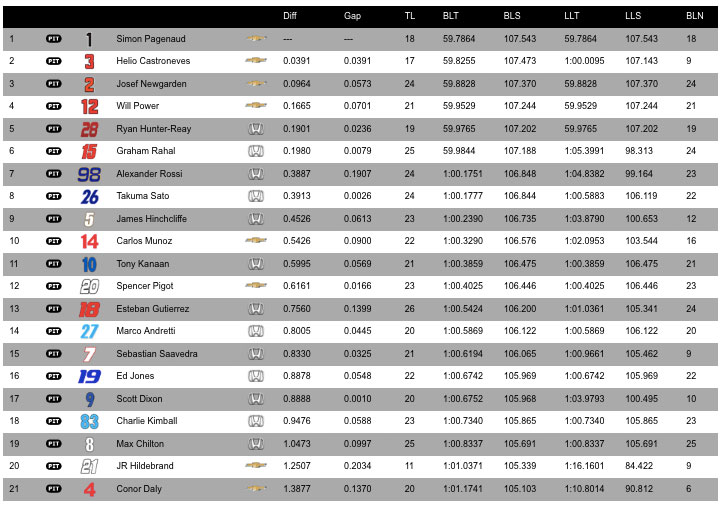