One of the more unheralded drivers entering this year’s Indy Lights Presented by Cooper Tires campaign has been Ryan Norman, the 19-year-old out of Cleveland who has made strides in his rookie campaign.

Norman was the only one of Andretti Autosport’s Indy Lights quartet new to the Mazda Road to Indy presented by Cooper Tires this year. Teammates Nico Jamin, Dalton Kellett and Colton Herta have all been in the MRTI before, while Norman has undergone a significant learning process of taking on new tracks and a new championship.

But Norman’s been one of the year’s more pleasant surprises with methodical growth and improvement over the course of the season.

Through 12 races, Norman has improved his starting position by the end of the race in nine of them, and scored 10 top-10 finishes overall – a number that is tied for second in the series with Zachary Claman De Melo, behind only season points leader Kyle Kaiser who has been in the top-10 in all 12. He’s also won multiple Tilton Hard Charger awards for advancing the most positions in a race from his grid position, and additional Staubli Awards.

Norman ranks 10th in the points standings, ahead of two three-year veterans and two rookies.

Incidentally, it’s been the few races where Norman has qualified in the top five – fourth at the Freedom 100, third at Elkhart Lake race one and fourth in Iowa – where his results haven’t measured up to his starting position. A first lap accident took he and Herta out at the Freedom, while he still banked solid fourth and eighth place finishes in the other two races. 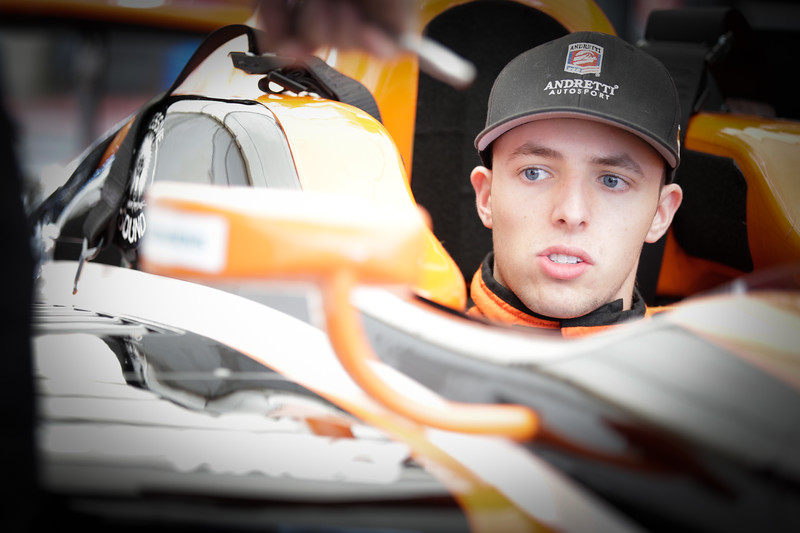 Norman heads to the Mid-Ohio Sports Car Course this weekend for the next step of his journey on his rookie season – literally.

After running in a vibrant orange-and-black livery the first 12 races, Norman will now step aboard the No. 48 Journey Mazda for Andretti Autosport this weekend, as the legendary rock band formed in 1973 comes onto the car, and the livery changes along with it for the balance of the season.

It’s an orange livery with yellow and blue stripes. Needless to say Norman is ready to rock out on home turf this weekend and look to continue his rapid growth in his first season this weekend.

“I am very excited to have Journey on board for the rest of my 2017 season,” Norman said in a release. “It’s unique to have a rock band sponsoring a race car. Journey was inducted into The Rock & Roll Hall of Fame in Cleveland, which is my hometown, so it makes the next race at Mid-Ohio very special to me. I love Journey’s music and having “Don’t Stop Believin’” on the side of my car is very fitting. This song has inspired a lot people including athletes like myself.”

Norman isn’t the only Andretti Autosport driver with a story this weekend at Mid-Ohio; teammate Jamin looks to snap a rough patch of results and extend his own personal winning streak at Mid-Ohio from its current run of five races between USF2000 (three races in 2015) and Pro Mazda (two in 2016) while Herta looks to keep his championship hopes alive. Kellett has had the opposite bit of luck as Norman this year; he’s qualified significantly better but had a rough run of results in the races themselves that haven’t matched his potential.