Rahal Letterman Lanigan Racing’s Graham Rahal topped the morning warm-up for this afternoon’s Honda Indy 200 at Mid-Ohio (3:00 p.m. ET, CNBC). His best lap of 1:05.0239 was nearly three tenths of a second up on Team Penske’s Helio Castroneves, who came in second with a best lap of 1:05.3007.

Rahal won this race in 2015 and is looking to get caught up in the championship. He sits 64 points back of points leader Scott Dixon heading into the race. On essentially a “win-or-bust” strategy, Rahal really has nothing to lose today.

The session saw one incident, but it was a big one as Ed Carpenter Racing’s Spencer Pigot crashed hard exiting the final corner. Pigot’s No. 20 Fuzzy’s Vodka Chevrolet quickly broke loose, but the front wheels gripped too much when he tried to correct it and the car shot straight off course and nosed into the concrete wall just after the tire barrier ended.

Pigot was able to exit the car and walk away under his own power, confirming afterward that he was okay, but the ECR team will have to prepare the backup car ahead of this afternoon’s race, as the tub of Pigot’s chassis was damaged in the impact.

Times are below. Note: the session was extended by five minutes to make up for time lost due to Pigot’s incident. Coverage of the Honda Indy 200 begins at 3:00 p.m. on CNBC. 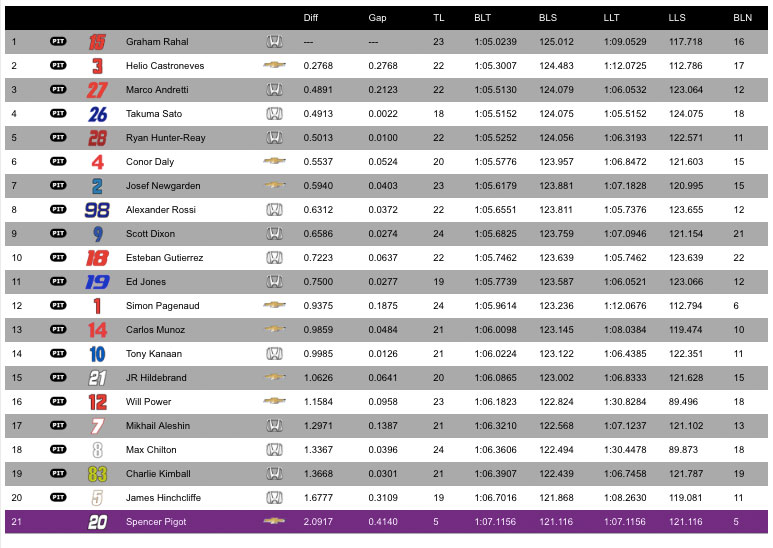