These are in addition to the schedule notes and other elements of this weekend, which will get broken out in later days.

The No. 48 Paul Miller Racing Lamborghini Huracán GT3, which had originally qualified sixth in the GT Daytona class, has been hit with a heavy penalty that will send the car to the back of the grid and also has championship implications.

The car’s ECU (electronics control unit) has been confiscated by IMSA, with the team fined $7,500 with the entrant and drivers (Bryan Sellers and Madison Snow) both docked 15 points.

A statement from Paul Miller regarding the No. 48 is below:

“We won’t comment on severity of the penalty or the specifics of the situation, but I’d like to commend the IMSA officials on the professional manner in which they went through their process yesterday.”

Following Katherine Legge’s incident in practice on Saturday, the No. 93 Michael Shank Racing Acura NSX GT3 has been fully repaired and got back together before Sunday’s race.

With spares from Acura, Shank and RealTime Racing, the No. 93 car is nearly as good as new. The only new piece brought in was part of a front bar added to the nose assembly from RealTime.

The Shank crew was done in the early evening and out of the track by about 7:30 a.m., in an impressive repair job that went quicker than anticipated.

PR – Mike Shank on the team's effort today to repair the No. 93 pic.twitter.com/SqQjOwET4w

Dan Binks, crew chief on the No. 3 Corvette C7.R, held the annual benefit auction for Camp Anokijig on Saturday at the Road America Corvette Corral. It helps raise funds for the local camp – which is Native American for “We Serve” – where Binks is both a board member and former camper.

Nearly 40 items were up for auction, including one of the front wheels from the No. 63 Corvette C7.R at this year’s 24 Hours of Le Mans – photographs and paintings. Last year’s auction raised more than $26,000 for the camp, which opened in 1926.

But this year topped it, with the auction raising more than $43,500 for the camp located in nearby Plymouth. The funds will go toward a new ventilation system in the campground’s kitchen and dining commons.

“I can’t say enough about the generosity of everyone who participated at this year’s auction,” Binks said. “It’s really encouraging to be able to improve the experience of our thousands of campers and the Anokijig staff. This means so much to me, my family and everyone at the camp.” 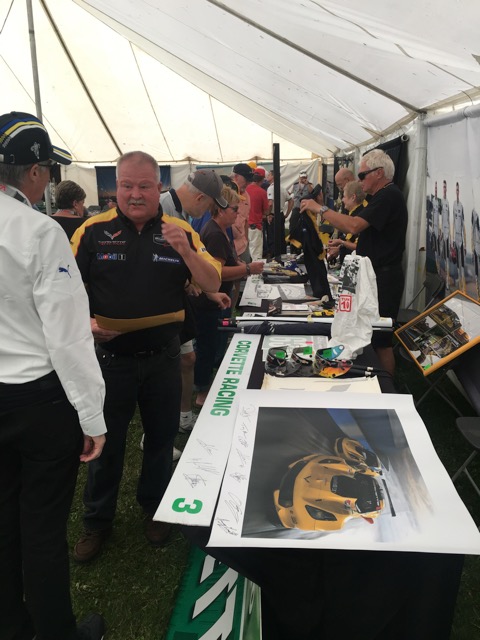 It was a good day for both Ligier JS P217 Gibsons on Saturday with Jose Gutierrez getting the No. 52 PR1/Mathiasen car into a season-equaling best start of the year in second, and Marc Goossens doing well to get VISIT FLORIDA Racing’s new Ligier into fourth.

“Yesterday was a difficult day because of the weather conditions but this morning we threw some things at it and the Onroak guys together with the VISIT FLORIDA Racing engineering group have given us a great car,” said Goossens.

“It is a matter of being able to touch it first to feel exactly what the car can do and by the time I managed to do that, the tires were no longer at their best. I think a 1:53.8-9 (second lap) would have been possible. We’re on the second row – it’s a big change for the team. I think we have a good race car – we still need to dial it in a little further. But we made quite a few changes – all the small ones together made for one big change. We need to keep tuning it but I think this baseline is pretty good for the race.”

Ricky and Jordan Taylor have a new podcast, that’s been announced this weekend. The new BadFast Podcast website is linked here and is sponsored by Continental Tire.

“This is an exciting announcement not just for the IMSA paddock, but for motorsports in general,” said Travis Roffler, director of marketing for Continental Tire. “Partnering with BadFast podcast is one more layer in Continental Tires continued commitment to helping grow the sport of racing in the US. Rob’s experience coupled with the liveliness of the Taylor brothers will offer the perfect foundation to talk about action on-track and happenings off-track. I think fans are really going to enjoy it!” 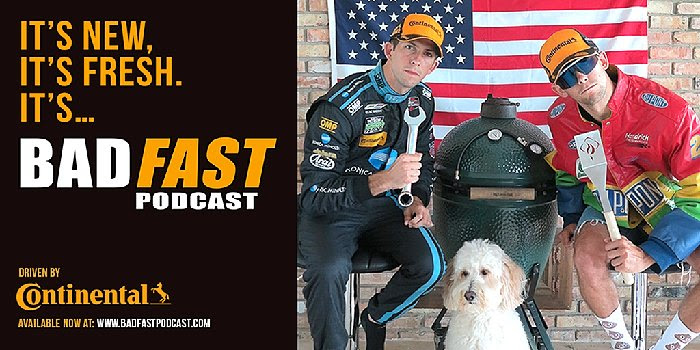 GOOD READ ON THE TAYLORS

From Radio Show Limited’s John Hindhaugh on the Taylor brothers, here’s a good read on their balancing act both as brothers and teammates. Here’s the feature for Mobil 1 The Grid.

Mike Johnson, strategist for the No. 57 Stevenson Motorsports Audi R8 LMS, will have his 300th career race start today in IMSA competition.

Here’s the provisional starting grid. A couple cars have changed tires and/or starting driver, and the No. 24 BMW Team RLL BMW M6 GTLM has had an engine change.

Meanwhile here’s the results from warmup this morning.

Meyer Shank Racing outdueled Wayne Taylor Racing to win the Petit Le Mans and clinch the championship in a thrilling final race for the DPi division.

Tom Blomqvist, who started from the pole position, drove the No. 60 Acura ARX-05 to a 4.369-second victory over Pipo Derani in the No. 31 Action Express Cadillac.

In between those two victories, the No. 60 earned five runner-up finishes to stay in the thick of the championship hunt and trail WTR’s No. 10 Acura by 14 points entering Saturday’s race.

WTR’s Filipe Albuquerque had a lead of more than 10 seconds over Blomqvist with less than 50 minutes remaining in the 10-hour race.

But a Turn 1 crash between the Chip Ganassi Racing Cadillacs brought out a yellow that sent both Acuras into the pits from the top two positions.

Though he entered in second, Blomqvist barely beat Albuquerque out of the pits, and he held the lead for the final 45 minutes.

WOW!
The 60 wins the battle off pit road and takes the lead over the 10 in the race for the @IMSA DPi championship.

Albuquerque closed within a few car lengths of Blomqvist with 14 minutes remaining, but he damaged his suspension because of contact with a GT car in Turn 1.

It’s the third consecutive runner-up finish in the points standings for Wayne Taylor Racing, which won the first Daytona Prototype international championship in 2017. The premier category will be rebranded as the Grand Touring Prototype (GTP) class with the LMDh cars that will establish a bridge to racing in the 24 Hours of Le Mans.

Kamui Kobayashi finished third in the No. 48 Cadillac of Action Express that also includes Jimmie Johnson and Mike Rockenfeller.

Johnson said a lack of inventory will preclude him having a 2023 ride in the top category. But he still is hopeful of racing the Garage 56 Next Gen Camaro in next year’s 24 Hours of Le Mans and possibly running in a lower class for the Rolex 24 at Daytona.

“I’d love to be at Le Mans next year,” Johnson told NBC Sports’ Dillon Welch after his final stint Saturday. “I’d love to be at the Rolex 24. The series is going through a shake-up with the reconfiguration of the rules and classes, so I don’t have anything locked down yet, but I’m so thankful for this experience with Action. The support Ally has given us, Mr. Hendrick, Chad Knaus, all of Hendrick Motorsports. It’s been a fun two years, and I certainly hope I’m on the grid again next year.”