LONG POND, Pa. – The Saturday morning practice for Sunday’s ABC Supply 500 at Pocono Raceway saw Honda jump to the fore, though a pair of incidents forced stoppages near the end.

Ryan Hunter-Reay topped the time charts with a quick lap of 219.268 mph, turned in the second half of the session. Hunter-Reay led Team Penske’s Simon Pagenaud, the best of the Chevrolet runners, the Frenchman turning a best lap of 219.211 mph.

Tony Kanaan was third for Chip Ganassi Racing, with Hunter-Reay’s teammate Marco Andretti in fourth after leading most of the session. Kanaan’s teammate Scott Dixon completed the top five, while sixth-place Takuma Sato and seventh-place Alexander Rossi made it four Andretti Autosport cars in the top ten.

The morning practice saw three stoppages. The first was only for a quick track inspection, but the next two were for crashes.

The first was for Ed Carpenter. Carpenter’s No. 20 Fuzzy’s Vodka Chevrolet broke loose exiting turn three 3 and smacked the outside wall with the left side. Carpenter climbed out unhurt, but the car sustained heavy damage. However, the team immediately began repairing the car ahead of qualifying this afternoon.

The other incident was for Dale Coyne Racing’s Ed Jones. Jones’ No. 19 Honda spun in the middle of turn 2, but only sustained minor damage to the front nose, which brushed the outside wall during the spin.

Both Carpenter and Jones were checked, cleared, and released from the infield care center. Times are below. Qualifying for Sunday’s ABC Supply 500 begins at 1:00 p.m. ET on NBCSN. 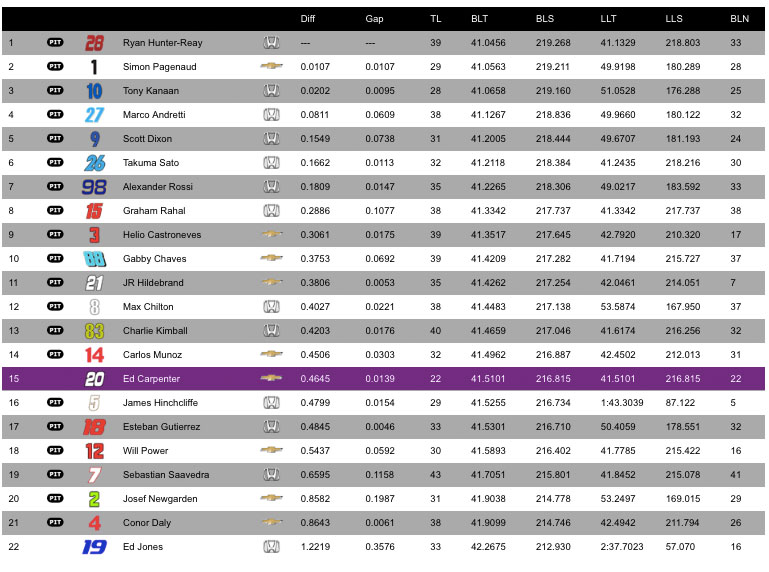