MADISON, Ill. – With teams having to do a balance of race and qualifying prep in the lone one-hour practice session before qualifying, Chevrolet teams excelled in the first running of the weekend for the Bommarito Automotive Group 500 presented by Valvoline at Gateway Motorsports Park.

Unsurprisingly it was the Team Penske quartet of Will Power, Josef Newgarden, Simon Pagenaud and Helio Castroneves that all hovered around the top of the charts, ultimately ending in a 1-4 sweep.

Power led the way for Team Penske at 185.551 mph (24.2521 seconds) around the 1.25-mile oval, as speeds were as expected to be significantly quicker on the repaved surface than in the past.

Beyond the Penske quartet, Ed Carpenter and Carlos Munoz also took turns in third place in their Ed Carpenter Racing and A.J. Foyt Enterprises Chevrolets, and Conor Daly was briefly second and first of all non-Penske cars in the second Foyt Chevrolet. They ended 17th, 16th and seventh respectively.

Top Honda was Ed Jones in fifth in his No. 19 Dale Coyne Racing Honda, the Dubai-based Brit having done well in testing here last month.  Jones’ best speed was 183.400 mph. He has finished 17th or worse in six of the last seven races.

There were a pair of yellow flag periods. The first came right off the top of the session when Max Chilton lost the back end of his No. 8 Gallagher Chip Ganassi Racing Honda in pit lane just after installation laps and contacted a pit official. That official was OK but Chilton was docked five minutes of green flag time, with the Ganassi team subjected to a post-weekend monetary penalty.

Qualifying will air live at 7:30 p.m. ET and 6:30 p.m. CT on the NBC Sports App (stream link here) and on racecontrol.indycar.com. The qualifying order is below.

Times from practice are below. 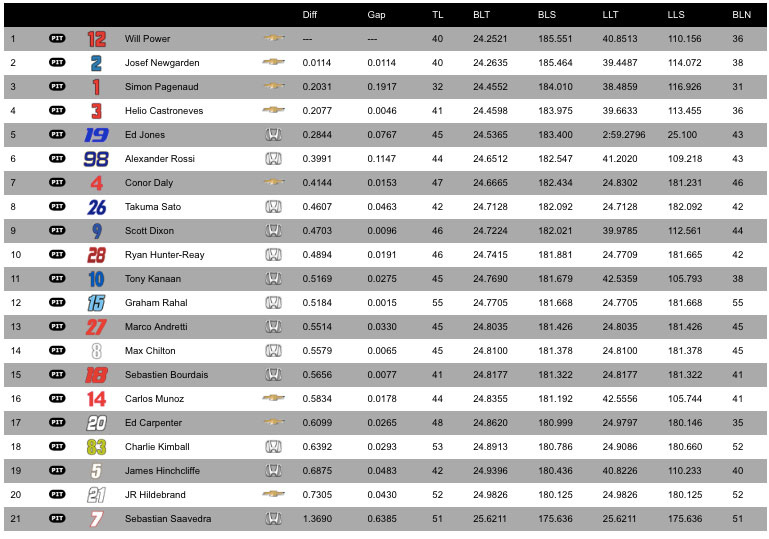