MADISON, Ill. – Santiago Urrutia did all he could to keep the Indy Lights Presented by Cooper Tires title fight alive with his second win of the season, but Kyle Kaiser has all but cinched the title with one race remaining following a wild 75-lap affair at Gateway Motorsports Park.

For the young American, with a revised 31-point lead unofficially over Urrutia, merely starting at Watkins Glen next week will ensure he wins the title and the $1 million Mazda Motorsports Advancement Scholarship that comes with it.

Kaiser entered the weekend with a 42-point lead and only needed a 34-point margin to ensure he had the title clinched before going to the season finale at Watkins Glen International.

It looked early on in the 75-lap race that Kaiser would be able to pull it off outright, but a strong start quickly faded as the race went on.

After shooting up to third on the initial start from fifth on the grid, Kaiser delivered his statement of intent to wrap the title on Saturday night by making a move on Urrutia for second place on Lap 9, going to the outside of his closest title rival for the position into Turn 1 in an authoritative move.

Urrutia got Kaiser back five laps later on the inside of Turn 1, but with Kaiser not needing to fight it to ensure he had enough of a points gap to clinch at that moment, he kept the door open wide enough for Urrutia to come through.

Up front, Urrutia was left to focus on catching surprise polesitter Juan Piedrahita of Team Pelfrey for the lead and subsequent win of the race.

Kaiser ran in third place with the best battle on the road behind him in the form of Andretti Autosport’s Nico Jamin and Carlin’s Matheus Leist close for fourth.

On Lap 43, Urrutia, having closed the gap significantly on Piedrahita, powered past for the lead into Turn 1. This pass meant Urrutia was within 34 points of Kaiser, who was running in third.

Meanwhile Kaiser fell back into the clutches of Jamin and Leist, which had championship implications in terms of whether Kaiser would have enough points to win the title tonight.

Jamin was by Kaiser for third by Lap 49, and then Leist was by shortly thereafter. Zachary Claman De Melo soon closed in and made a move during the final 20 laps for fifth, and Kaiser then had to hold off Colton Herta for sixth.

On Lap 62 there was a heavy three-car accident that occurred. Contact occurred between Chad Boat, the series debutante, and Neil Alberico entering Turns 1 and 2 as Alberico attempted to lap Boat, and Garth Rickards also got caught up in it. That took out two of the three Carlin cars (Alberico and Rickards), with Boat the third Belardi car (along with Aaron Telitz and Shelby Blackstock) to be involved in an incident during the race.

The race was red flagged as a heavy amount of debris littered the track.

Red flag – the track is covered with debris, Dapero is into the pits with damage from running over pieces

Following the restart, a chaotic battle for the lead occurred between Piedrahita and Urrutia, with Piedrahita briefly getting the advantage on the restart to take lead before another quick yellow was flown for a spinning Nico Jamin.

Jamin’s spin moved Kaiser up a position, again making it appear like he may clinch the championship outright. However, a restart with three laps remaining saw Urrutia finally edge passed Piedrahita, the two going side-by-side for a full lap before Urrutia cleared him for the lead with two laps left. Urrutia was able to hang on from there to take the win.

Colton Herta meanwhile moved up to third while Kaiser ended up fourth, with Nicolas Dapero completing the top five. 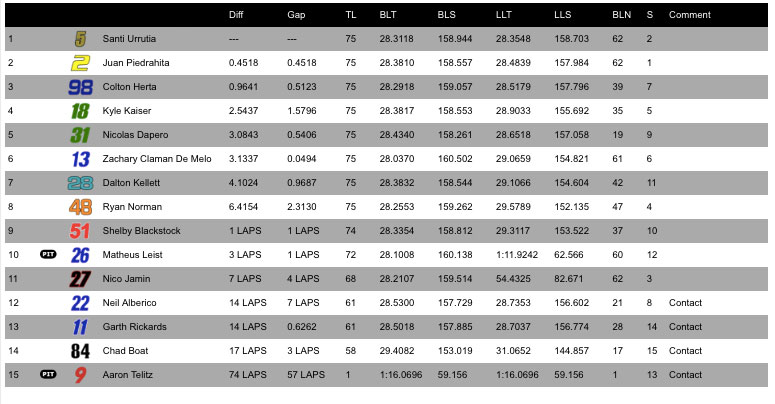