Dixon, driving the No. 9 NTT Data Honda, laid down a best time of 1:22.6187 early on in the one-hour session, which held up for the rest of the way, and was set on Firestone’s black primary tire.

As Dixon’s pole time was 1:22.5259 last year, it was a highly impressive time considering both Firestone’s blacks and also red alternate tires can be used in the session. Cool conditions played into the great times, with ambient temperatures only in the 50-degree Fahrenheit range all session.

It was the second straight session a Honda led, after Graham Rahal flew to the top of the charts near the end of the morning session.

Rahal was third this session, behind top Chevrolet runner Will Power in the No. 12 Verizon Team Penske Chevrolet. Power was close at 1:22.7129, with Rahal third in the No. 15 United Rentals Honda for Rahal Letterman Lanigan Racing at 1:22.9716.

Those three drivers were the only three in the 1:22 bracket this session.

Points leader Josef Newgarden was only 10th; Jack Harvey improved to 18th, actually ahead of Schmidt Peterson Motorsports teammate James Hinchcliffe, by just 0.004 of a second.

The session had five extra minutes added on following a red flag for an incident for Max Chilton. The Englishman lost control of his No. 8 Gallagher Chip Ganassi Racing Honda exiting the Bus Stop and tattooed the wall at Turn 5 with the right side of his car.

Helio Castroneves had a minor off exiting the Boot and brushed the guardrail, but returned without any significant damage to his No. 3 Hitachi Team Penske Chevrolet. 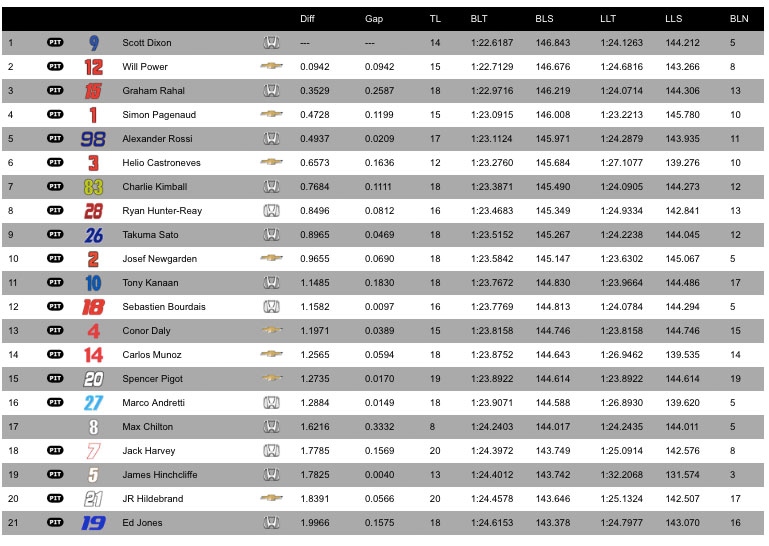