WATKINS GLEN, N.Y. – Rahal Letterman Lanigan Racing’s Graham Rahal went quickest in opening practice for the Verizon IndyCar Series’ INDYCAR Grand Prix at The Glen (1:30 p.m., NBCSN), nipping Andretti Autosport’s Alexander Rossi as on his final lap as Rossi spent most of the session at the top of the speed charts.

Rahal’s quick lap of 1:23.2603 bettered Rossi’s 1:23.4686 by two tenths of a second. Chip Ganassi Racing’s Max Chilton and Scott Dixon ended up third and fourth, with Schmidt Peterson Motorsports’ James Hinchcliffe in fifth, making it a top five sweep for Honda in the opening practice.

.@GrahamRahal took the top spot on his last lap! Can he get a race win at @WGI this weekend? #INDYCAR #INDYCARGP https://t.co/1I2Xejdij6 pic.twitter.com/KmNNEFFs2i

The session saw no stoppages, although a few drivers had minor incidents. Alexander Rossi had a minor off in the bus stop chicane that saw him run slightly wide into the runoff area, while James Hinchcliffe and Ryan Hunter-Reay had quick spins of their. However, none made any wall contact and all three quickly regrouped and continued on.

Also of note: Jack Harvey, on his debut with Schmidt Peterson Motorsports, ended up 20th.

Times are below. Second practice for the Verizon IndyCar Series begins at 3:05 p.m. ET. 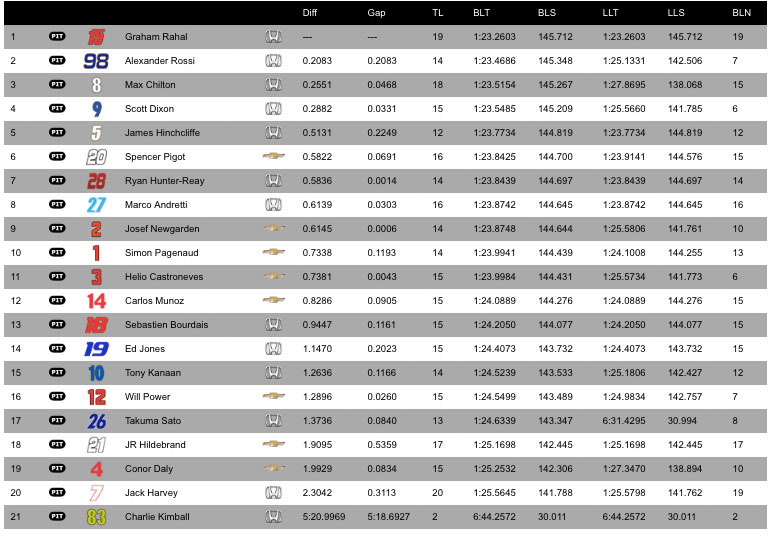