Newgarden posted an important best lap of 1:16.2485 while running on Firestone’s red alternate tires during the second 45-minute session of the day. He also led this morning’s session at 1:16.3950 in cooler conditions.

Driving the No. 2 hum by Verizon Team Penske Chevrolet, this time was under the official track record mark of 1:16.2530 set by teammate Simon Pagenaud last year, for pole.

“We learned a little about the tire. Definitely different from last year,” Newgarden told NBCSN’s Kevin Lee. “The red compound is similar to what the black was last year. We have a different black this year. Understand what you need on each of them. The track still seems pretty fast. We’ll see what we got. It’s easy to mess up in Sonoma.

“The big thing about the track is there’s a lot of wind around this place. A lot of dust and sand. There’s so much dirt and debris. One guy drops the wheel and it’s a full corner. We have the best in the business with Team Penske.”

The Team Penske quartet was 1-4, with Newgarden ahead of Pagenaud, Helio Castroneves and Will Power.

There was one red flag for a rather abnormal circumstance, as two fans made it out onto a grassy area beyond a fence. Despite the brief session interruption there were no other incidents of note. 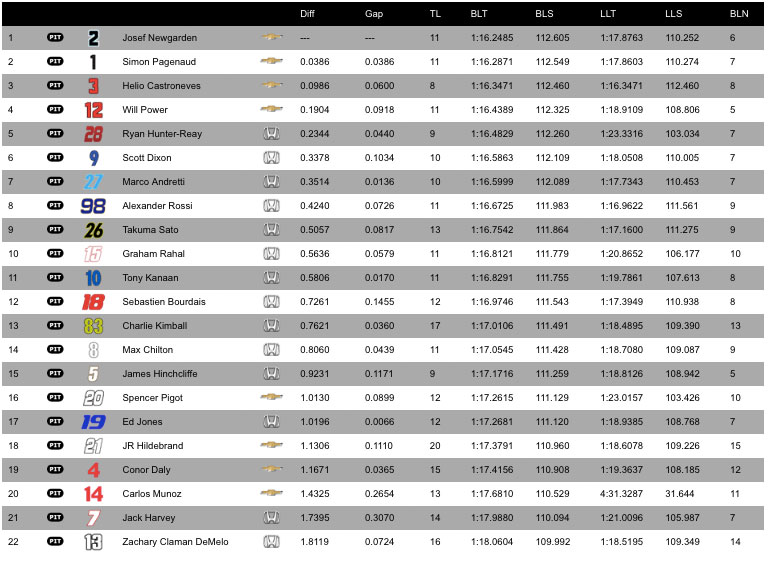